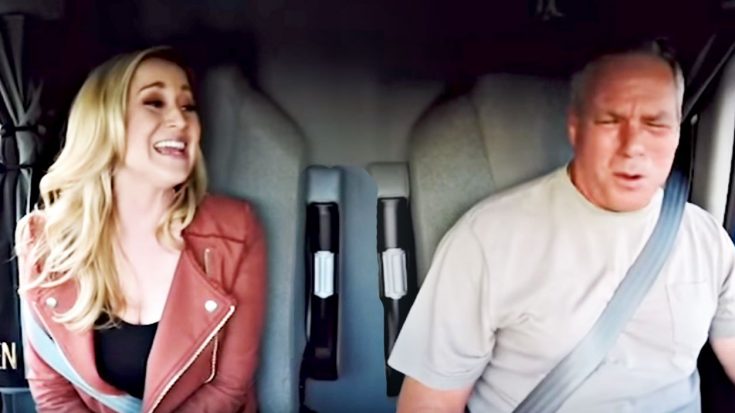 Hopping in the cab of a big rig truck with one of the internet’s most famous singing truck drivers, this blonde country star turned TV host talked him into a surprise duet of a timeless classic!

Appearing on Kellie Pickler‘s new TV show, Pickler and Ben, Brad James who is known as “The Singing Trucker,” told her all about his adventures and internet fame before these two jumped right into a duet of Keith Whitley‘s “Don’t Close Your Eyes.”

James, who just recently launched his debut album, has been singing from his truck for several years and kicked off his musical past time by recording himself with a karaoke app that would post his sessions to Facebook. From there, things just snowballed!

Asking him a variety of questions as they being to roll down the road, Pickler beams while they laugh and discuss a number of topics about life on the road. The conversation quickly turns to music and they both connect as fans of Keith Whitley.

Without further ado, they jump straight into an a cappella duet of Whitley’s beloved favorite “Don’t Close Your Eyes.”

Watch Kellie Pickler and Brad James “The Singing Truck Driver” perform their duet in the video below!