By Miranda Raye on August 25, 2017
Advertisement 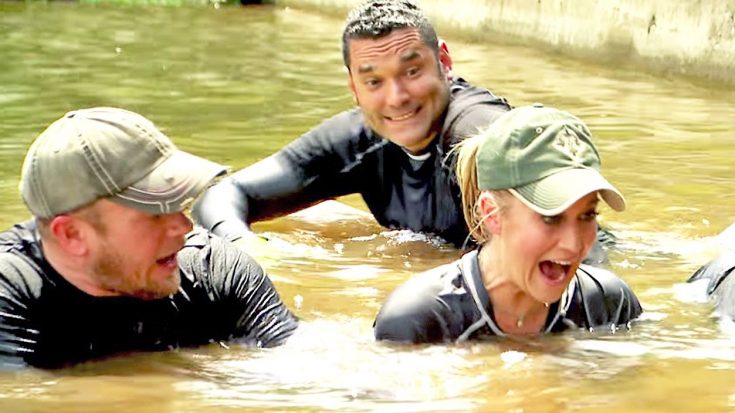 We got used to watching Kellie Pickler do some pretty crazy things on her former CMT reality show I Love Kellie Pickler. She went sky diving, drove an ATV around Lee Brice‘s property, and even formed a “biker gang.” Another episode shows Pickler fully embracing her wild side as she attempts to catch a massive fish.

But this was no normal fishing trip. Instead, Pickler, her husband Kyle Jacobs, and a group of their friends decided to try out a fishing technique known as “noodling.” Popular in the South, noodling involves digging down in a catfish hole and catching the fish with nothing but your bare hands and arms.

As you would expect, noodling can get pretty intense at times. Catfish can grow to be quite large, and it’s often a challenge for a single person to hoist one out of the water while noodling.

Also, for those who have never tried noodling before, the experience can be a little scary. Since Pickler had never gone noodling in the past, she was a bit freaked out over the idea of a catfish latching on to her arm.

CMT uploaded a short clip from Pickler’s noodling experience, and it is comedy gold. Lying on her belly, Pickler reached down into the catfish hole and began digging around for her catch. But she was not happy about the whole ordeal, and she made that clear.

As freaked out as Pickler was before, she was beyond frightened once the catfish finally latched on to her arm. She couldn’t stop screaming as her friends rushed to help her out, and ran away in pure terror once the catfish broke the surface.

For being a noodler newbie, Pickler came up with quite the catch. The catfish she found was massive!

Tune in below to watch the video of Pickler’s hilarious first attempt at noodling. It’s sure to give you a good laugh!