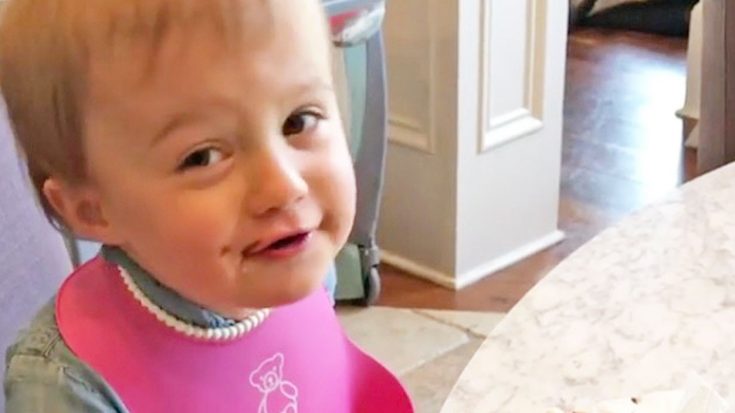 When Kelly Clarkson isn’t busy at work in the recording studio or on stage, she spends every second she can with her children. Kelly is the proud mama to her stepchildren Seth and Savannah as well as her own kids, River Rose and Remington Alexander.

All of Kelly’s kids make frequent appearances in photos and videos that she shares on her social media accounts, especially River. On Sunday (April 9) Kelly shared what has to be one of the sweetest videos of River that we’ve ever seen.

The video shows River enjoying a piece of toast with Nutella on it. Kelly revealed that it was River’s first time tasting the popular hazelnut spread. Based on River’s reaction, we’d say that she likes it.

River took a great big bite of the toast, smearing Nutella all over her face in the process. When Kelly asked her if she liked Nutella, River responded by doing a happy dance in her seat. We’ll take that as a yes!

River's first Nutella experience. It should have been via crepe but toast was easier ? #nutellagoodness #australiagoodness

While many fans couldn’t stop gushing about how cute River was in the video, others were not pleased with what they saw. The video quickly became a source of backlash as many fans criticized Kelly for feeding Nutella to River.

“As a mom let me give you an advice, please don’t give that to your [kids],” wrote one fan. “Check out the ingredients.”

Many others encouraged Kelly to stop feeding Nutella to River, with one person writing, “Stop eating Nutella it’s been confirmed to give cancer.” Another commenter wrote, “Giving food like this to a child is ‘child abuse.’“

However, many more jumped to Kelly’s defense, with one fan pointing out that a little Nutella won’t hurt anyone. “I’m sure she isn’t feeding this to her everyday (sic). Everything in moderation is fine.”

Another person mentioned that those criticizing Kelly would probably be surprised to find out what’s in the food in their own homes. “If all these haters looked in their own kitchens and pantries they’d most likely be in for a few unhealthy surprises of their own,” they wrote.

What do you think of all of this? Let us know your thoughts in the comments.

It’s clear that Kelly loves her little girl. She even made an appearance in her emotional music video for “Piece by Piece.” You can catch that video below.