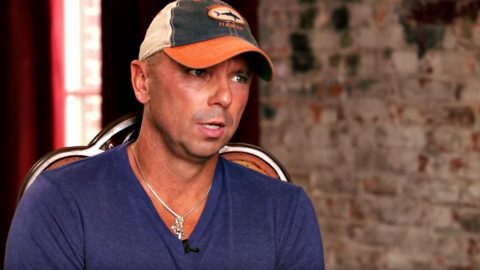 Just 2 days before his fans were supposed to get their albums, the singer yanked it off the shelves because of one big issue. And the delay lasted months.

Originally scheduled to go on sale in July 2016, Kenny Chesney‘s Cosmic Hallelujah album aborted his plans for it in a last-minute press release…and now he’s revealing the real reason behind the delay.

In a new interview with Entertainment Weekly, Chesney blames it all on his duet partner for the now-hit song, “Setting the World on Fire”, Pink.

Apparently Chesney wanted the album’s first single to be his duet with Pink, but that didn’t happen and he had to choose something else, but admits that the delay was on her side of things.

“I wanted the Pink song [“Setting the World on Fire”] to be the first single, but her camp wasn’t ready, so we went with “Noise.”

While a lot of fans were upset, and three months of a delay seemed like an unfair extension for the ones that had been waiting two years for a new album, there was definitely a silver lining to the delay.

“Once we changed the schedule, it allowed me to dig a little deeper and give myself another three months of seeing what songs I could write,” Chesney added.”

What do you think of the delay and his reasoning?

Watch the full music video for their duet below and let us know your thoughts in the comments.