By Jennifer Pernicano on August 21, 2015
Advertisement 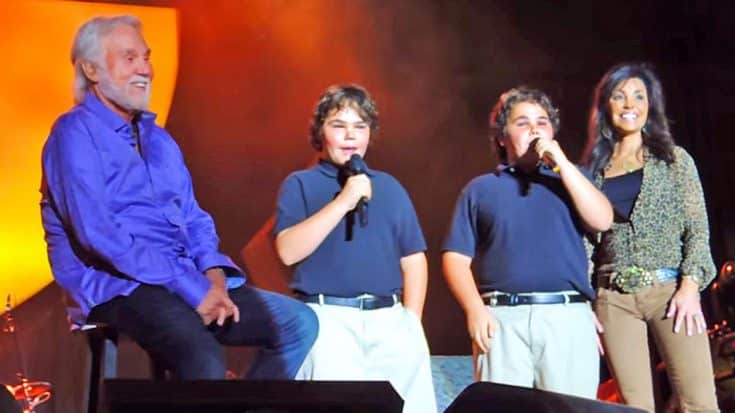 Did y’all know Kenny Rogers is a proud father of five, including two twin boys?

Family is the most important thing to me. I'm always grateful for the time we are able to spend together.This photo…

Well if you didn’t, after watching this video, there won’t be a doubt in the world. At the North Georgia State Fair in 2014, Kenny took his place on stage and emotionally performed “To Me,” while photographs of his wife and twin sons flashed across the screen behind him.

“To Me” is the perfect song to dedicate to your loved ones. It’s all about depending on those you hold dear and finding truth in that relationship that you so love.

In the chorus, he sings,

This is probably the sweetest thing you’ll see all day. You can hear the audience saying “Awww…” in the background and we bet you’ll be doing the same. When the beautiful performance ends, Kenny welcomes his sons, Jordan and Justin, and wife on stage. Right away the boys take control of the microphone and start speaking with an obvious confidence about their friends. That’s not all though, they also mention the baseball game they lost that day (6-8). It’s a big family affair!

But it wouldn’t be complete without a little performance by the twins. Jordan and Justin break out into their favorite song of the moment, Ross Lynch’s “Without You” from the Disney Channel show Austin & Ally.

Kenny and his wife, Wanda, are all smiles during the entire thing. Y’all just have to see this. It’s fantastic!