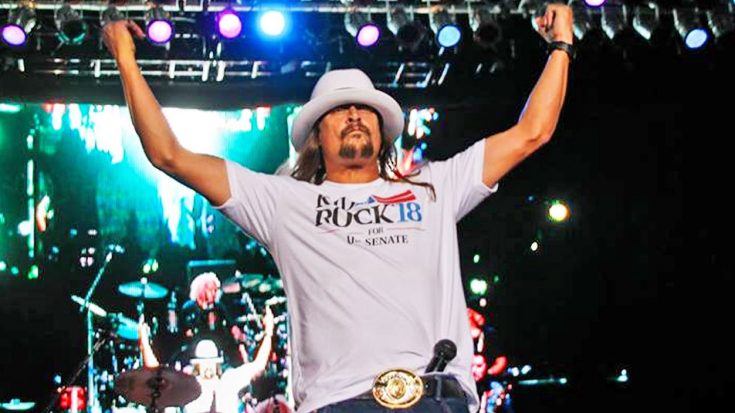 Over the summer, rumors were swirling that musician Kid Rock would be venturing into politics in his home state of Michigan. He didn’t comment on those rumors until July 12 when he put out a full statement and even launched a new website, kidrockforsenate.com.

In the statement, he wrote, “During this time while exploring my candidacy for US Senate, I am creating a 501(c)(4) – a non-profit organization for the promotion of voter registration. Not only can I raise money for this critical cause, but I can help get people registered to vote at my shows.”

He added that he realized the media was speculating that his Senate run was a “ploy to sell shirts or promote something.”

“I can tell you, I have no problem selling Kid Rock shirts and yes, I absolutely will use this media circus to sell/promote whatever I damn well please (many other politicians are doing the same thing, they just feed you a bunch of bullshit about it). But either way, money raised at this time through the sale of merchandise associated with this very possible campaign will go towards our ‘register to vote’ efforts,” he added.”

When my name was thrown out there for US Senate I decided to launch https://t.co/RRVgISDFeq….

Even though the rocker never fully said if he was or wasn’t going to run, he had a considerable amount of support from fans, his community, and even politicians. While appearing on The Howard Stern Show, the shock jock informed the “Picture” singer that the former Governor of New York had endorsed him!

“F*** no, I’m not running for Senate! Are you f***ing kidding me? Who couldn’t figure that out?” he said. “I’m releasing the new album on November 3rd or something like that, I’m going on tour, too, which no one’s gonna print.”

He went on to say that some members of his own team were so convinced by the “campaign” they put together that at one point, someone asked him, “Wait, are we really doing this?“

Kid Rock explained he just took the rumors that everyone had created and used it to his advantage to promote his 11th studio album, the upcoming Sweet Southern Sugar, as well as his arena tour, which kicks off on January 19 in Nashville.

Listen to him explain everything to Howard Stern below. *Warning: Strong Language*