By Jennifer Pernicano on December 15, 2016
Advertisement 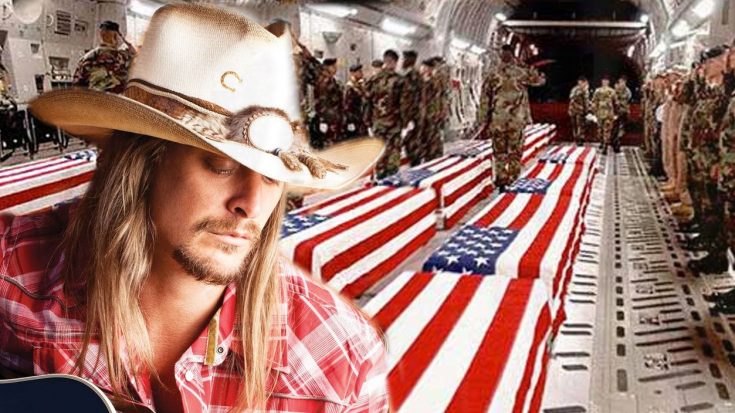 Kid Rock has been an adamant supporter of our nation’s military. Over the years, Rock has performed countless times for service men and women overseas in countries including Iraq, Afghanistan, Kuwait and Kosovo.

Kid Rock is a proud supporter of our troops, and this weekend (10/25) he's headed to Augusta, GA to support several…

He is also heavily involved with the organization Operation Homefront, which provides emergency assistance to U.S. military troops, families they leave behind, and wounded warriors when they return home.

Rock teamed up with Nova Scotia rock band The Trews for an emotional tribute to our military called “Highway of Heroes.”

Proud to be Champions of the Highway of Heroes Tribute! A project that will see 117,000 trees planted along the Highway…

The song is sung from the point of view of a fallen soldier who is being brought home after being killed in the war. The Trew’s lead singer Colin MacDonald sang the opening verse and chorus, which sets up the moving story.

In the second verse, MacDonald sings, “I served without question, or personal gain/Seek no justification, It’s not part of my story/And it offers no comfort to the ones who remain.”

Although the narrator has passed on, he doesn’t want his family and friends to try to justify his death, no matter how hard it may be. Rock joined MacDonald on the second chorus and it will give you chills. Their harmonies singing the heartbreaking lyrics will likely bring tears to your eyes.

Rock shared the video on his Facebook along with the caption, “We don’t have to wait for a holiday to thank our service men and women. Take a moment to thank a veteran or service member today.”

Kid Rock joined The Trews on their song "Highway of Heroes." We don't have to wait for a holiday to thank our service…

Watch the video for “Highway of Heroes” below.