By Jennifer Pernicano on August 21, 2017
Advertisement 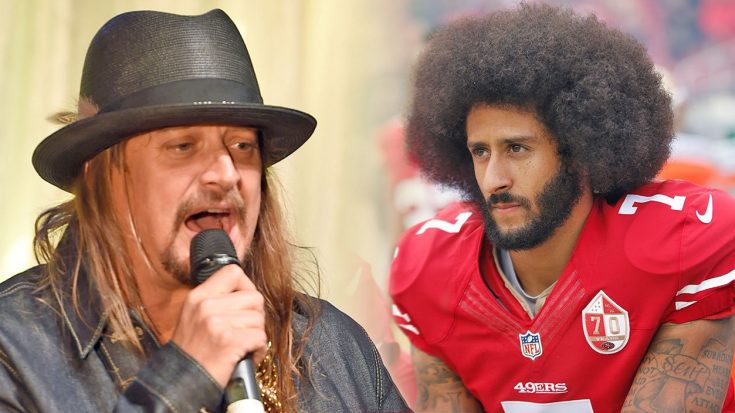 He is in the middle of a potential run for Senate, but according to The Des Moines Register, Kid Rock kept his show at the Iowa State Fair politics free – until he didn’t.

He performed for thrilled Iowan fans for over an hour before he got political. During the bridge of his military-inspired song “Born Free,” Kid Rock delivered a fiery message to Colin Kaepernick, the former San Francisco 49ers quarterback who protested the National Anthem last year.

After the preseason game where he sat during the singing of “The Star Spangled Banner,” he spoke with the media and explained why he took those actions.

“I am not going to stand up to show pride in a flag for a country that oppresses black people and people of color,” Kaepernick said. “To me, this is bigger than football and it would be selfish on my part to look the other way. There are bodies in the street and people getting paid leave and getting away with murder.”

His stance ruffled the feathers of thousands of patriotic Americans who, after almost a full calendar year, are choosing not to forgive and forget. He opted out of his contract with the 49ers in March 2017, making him a free agent. A team has yet to sign him, leaving many to believe that NFL owners don’t want to deal with the media firestorm of having him on their team.

In the middle of his record-breaking performance, Kid Rock said to the crowd, “Football’s about ready to start. You know what? F**k Colin Kaepernick!“

This isn’t the first time he’s said this fiery statement. He previously called out the quarterback at a September 2016 show at Fenway Park.

Let us know what you think in the comments section! Watch him perform “Born Free” at the California Mid State Fair below.