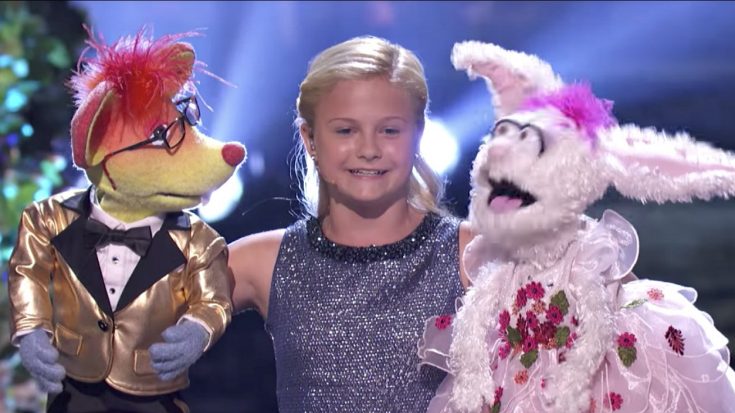 Darci Lynne Farmer has been the one to beat during Season 12 of America’s Got Talent. Ever since the 12-year old ventriloquist took the stage for her Golden Buzzer-worthy audition earlier this summer, she has wowed us over and over again, and Tuesday night’s (September 19) finals performance was no exception.

For the first time, Farmer appeared on stage with not one puppet….but two! With Oscar the mouse on one hand and Petunia the bunny on the other, Darci Lynne brilliantly carried on a three-way conversation that included an argument between the puppets about who was responsible for the act making it to the finals.

At one point, Oscar became so nervous that he passed out as Petunia was showing her diva side for the first time. Just when we thought Darci Lynne couldn’t get any better, she shocks us by performing a duet with her puppets. They sang the Beatles’ tune “With A Little Help From My Friends” as Darci flawlessly went back and forth between the two different voices, showing off her impressive vocals and seemingly impossible ability to stay composed under intense pressure.

Darci Lynne’s performance earned her a standing ovation from the audience and the judges panel.

“You are hands down incredible!” Mel B told Darci Lynne. “You’re so poised and I still don’t know how you do it, because you are that professional.”

The Season 12 winner will be announced during a star-studded show Wednesday night (September 20).

Check out Darci Lynne Farmer’s impressive routine in the video below.