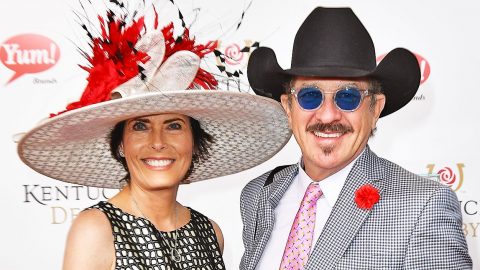 These days, it seems that no country artist is safe from having a host of online imposters. Basically, if you’re even the least bit famous, there’s likely someone out there on social media pretending to be you.

Many country stars have famously called out these online scammers in the past, including Chris Young and Jake Owen. Usually, these artists end up finding out about the imposters’ existence after being clued in by fans.

But Brooks & Dunn‘s Kix Brooks learned about one of his online imposters courtesy of his wife, Barbara. This scammer goofed up big time, because out of all people he could message on Facebook, he sent a message to Barbara herself.

Barbara said the whole thing was “pretty hilarious,” and shared the scammer’s message with her followers on Twitter. Poorly written and filled with horrendous mistakes, the scammer asked Kix’s wife of 36 years if she was single.

Here’s part of the message…this quote portrays it exactly as written:

“I sent you a request on here because you are very beautiful woman I have been single for me because my ex cheat on me but with God all things are possible Are you single?”

Barbara thought it was quite ironic that a Kix Brooks imposter would be messaging her to ask if she is single! Of course, it’s likely that the scammer sent the same message to countless other people, but the fact that Barbara was one of those people resulted in him being caught red-handed!

The irony of one of the @KixBrooks hackers sending this message to me is pretty hilarious. pic.twitter.com/KaJF2YT1Q6

If you ever come across someone posing as a country artist on social media, you can help get their profiled removed by reporting it. Keep in mind for your own safety that all official artist pages are verified on social media with a blue check mark. Just look at this photo of Kix’s official Twitter page for reference. If you ever get a message from an artist whose page doesn’t have a blue check mark, you should report that profile. Don’t send the “artist” any money, give them your phone number, or offer up any personal information.

It’s a good thing Barbara did get that message from the Kix scammer, because now he has been exposed to thousands of people!