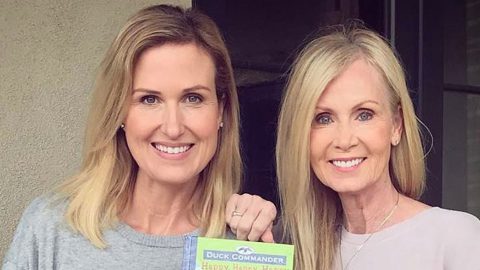 Thanks to the platform the hit show Duck Dynasty has given her, Korie Robertson quickly became a  New York Times best-selling author. She has co-written the books The Duck Commander Family with her husband Willie, and The Women of Duck Commander with her sister-in-laws and mother-in-law, Miss Kay.

She has also released a hugely successful devotional, Duck Commander Devotions for Kids with her mother, Chrys Howard. In October 2015, she released a solo endeavor called Strong and Kind: And Other Important Character Traits Your Child Needs to Succeed.

Thanks to a Facebook post, Robertson revealed she just released a brand-new book, Happy, Happy, Happy Stories For Kids, which she co-wrote with Howard, on Tuesday (Feb. 21).

“We’re releasing this baby into the world today,” she captioned the photo. “So much fun to write with my mom…Perfect for reading to your kids and [sic] night and starting conversations about important life lessons like honesty, patience, faith, generosity, kindness, courage, and more! Plus the artwork is adorable!!”

According to the description on Amazon, the book is, “Full of mostly true-ish stories from the Duck Pond…Korie Robertson and her mom, Chrys Howard, have partnered to bring you hilarious and heartwarming stories that demonstrate valuable lessons and family values. Whether it’s the importance of being prepared, working hard, or relying on God when you’re scared, the Duck Dynasty gang has a story for you!“

Yay!! We’re releasing this baby into the world today “Happy, Happy, Happy Stories for Kids” So much fun to write with my…

Buy the book on Amazon here.