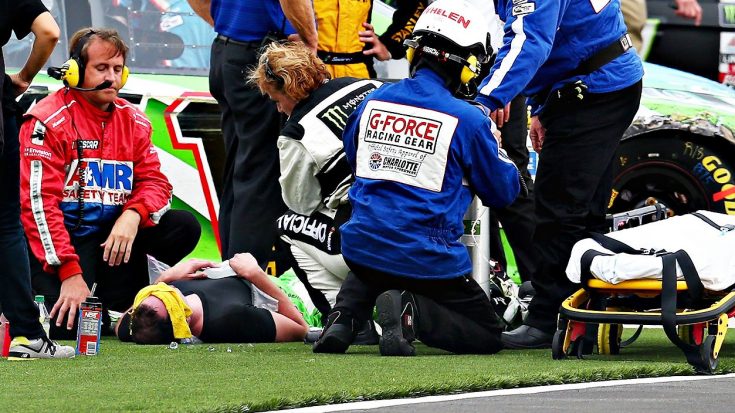 He immediately exited his car and collapsed on the ground calling for medics to attend to him moments after finishing the race at this weekend’s Bank of America 500.

NASCAR driver Kyle Busch endured a troublesome race this weekend and the ending was one of the worst parts. He dropped to sixth in the playoff standings after finishing at 29th, snagged some damage after a couple spin-outs, and ended up in the medical center.

Although he suffered some serious damage, his team was able to repair it and allow him to continue on – but this was just the beginning of his problems. Throughout the race, Busch fought off waves of unbearable heat during an already extra-hot day in Charlotte.

Each bump and brush with the wall that damaged his car allowed more carbon monoxide to seep into the vehicle, furthering his condition and making each lap harder than the last.

“I … felt like I had heat stroke just from being inside the race car for 200 laps with the crush panels knocked out of it,” Busch told NASCAR.

Nearly instantly after the race was over, Busch exited his car and collapsed on the infield grounds calling for medical attention – later describing his “evil” conditions similar to heat stroke and heavily-elevated carbon monoxide levels.

“After I first tore it up, it was just a handful from there. Literally, as soon as I did it, just coasting around under caution I could feel it being about 50 degrees hotter inside the car. It just got so hot that you literally felt like you were going to puke.”

Treated in the medical center for about an hour, Busch later stated that the medics measured his CO levels in the “double digits,” adding “that was just the hottest I’ve been in the car.”

Watch NASCAR’s full report on the incident below and let us know what you think in the comments.