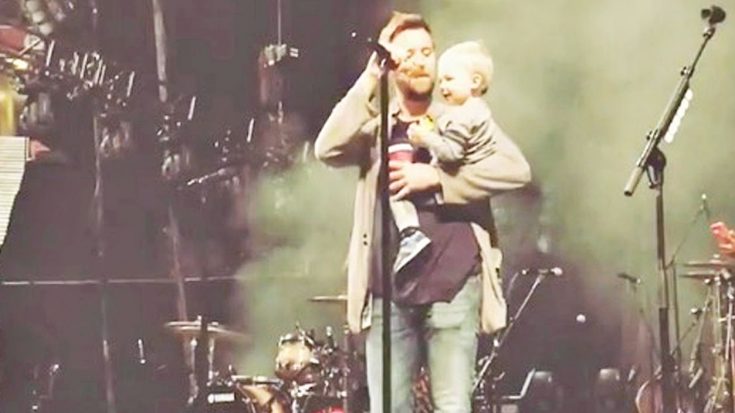 Looks like there could one day be another singer in the Lady Antebellum family!

During the sound check prior to the trio’s performance in Manchester on Wednesday (October 4), Charles Kelley enlisted the help of his one-year-old son, Ward. Charles’ wife Cassie shared an adorable video on Instagram that showed the father-son duo testing Charles’ mic for the show that night.

Holding Ward with one hand and a coffee in the other, Charles began talking into the mic to make sure it worked. Ward seemed intrigued by the whole thing, so Charles encouraged him to speak and sing into the mic as well.

Charles started off with a simple “yeah, yeah, yeah” which Ward enthusiastically mimicked. That prompted a few giggles from the crew, so Charles tried to get Ward to do it again.

After Ward spoke into the mic a second time, Charles decided to try and get him to do a little more. He said “yeah,” in a sing-songy voice, aiming to have Ward copy him. Ward seemed like he was going to at first, but ended his little performance with a happy coo.

Charles tried a different tactic next, and started singing the theme song to the popular children’s cartoon, Bob the Builder. But no matter how hard he tried to get Ward to sing or speak into the mic again, he wasn’t into it any longer.

For the short moment that he was interested in the mic, Ward sang his little heart out! Who knows, it may not be long before he’ll be singing along with his dad like a seasoned pro.

Tune in to the clip below to watch Charles and Ward’s super cute sound check experience. Hopefully Ward becomes even more comfortable in front of the mic, because we’d love to see more moments like this!