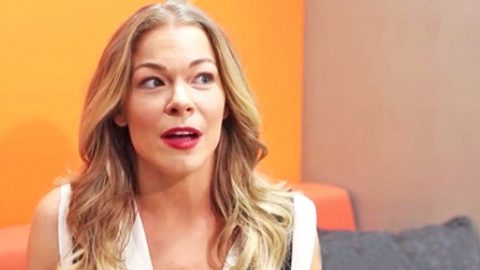 On the surface, it seems like LeAnn Rimes has it all. She is regarded as one of the best female vocalists in country music history, earning frequent praise for her rich, powerful voice.

But that powerful voice once covered up a lot of hidden insecurities for Rimes. She recently opened up about those insecurities during an interview with TODAY.

When Rimes was only two years old, she was diagnosed with the autoimmune disease psoriasis. The disease leads to the formation of patches on the skin, which can be red and itchy. In some extreme instances, the patches can cover the entire body.

That was the case for Rimes, who said she was 80% covered by the time she was six years old.

“I was constantly in a state of covering up everything as a kid and feeling really uncomfortable,” she said. “I didn’t realize how much it had impacted my self-confidence and just really kind of feeling like a woman.”

Since she had such a lack of confidence when it came to her body, Rimes turned to music to help her.

“I think I was very disconnected from my body so that was the one way I could really connect,” she said. “So I think music has been a very, very healing thing for me.”

Rimes opened up about her psoriasis for the first time in 2008, and has since participated in a PSA to raise awareness. Now her skin is all clear, giving her a new sense of confidence in the process.

“My advice to others is to own it,” she said. “Own who you are, because it feels really good when you do.“

You can tune in below to watch Rimes’ full interview with TODAY.