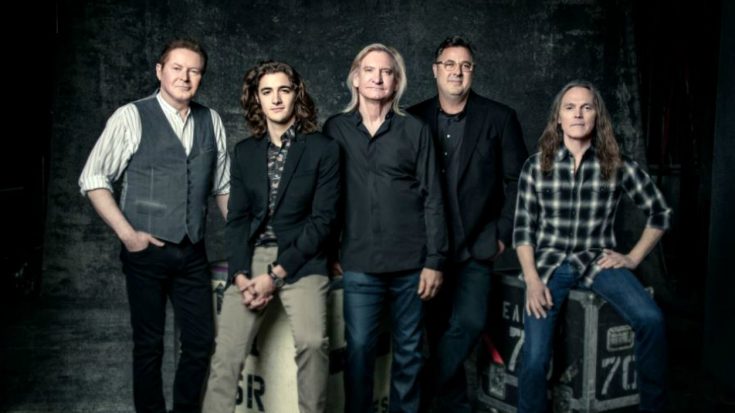 Legendary rock band, the Eagles, are slated to make their Grand Ole Opry debut during an invitation-only show on October 29th. The concert is part of a partnership with SiriusXM, which will launch a limited-run Eagles Channel in mid-November, according to Rolling Stone.

The Eagles will be joined by country star Vince Gill who has been filling in for the group’s late lead singer, Glenn Frey, who passed away in 2016. The Opry is known as “country’s most famous stage” and many might argue that the Eagles seem like an odd fit, but Vince Gill begs to differ. In an interview earlier this year, Gill addressed the profound influence the rock band had on his career and on country music.

“A record of mine like When Love Finds You sounds like an Eagles record. They’ve been as big a part of my learning curve as the greats of the country and Western world,” Gill told Rolling Stone. “We all talk about our history in country music and we respect Merle Haggard and George Jones. And I mean no disrespect when I say this, but the Eagles had a bigger impact in that more people chose to emulate them.” Gill add, “I find it interesting in that country music never embraced the Eagles, yet they had as profound an impact as anybody that’s ever been in country music.”

Gill, an Opry member since 1991, has performed on the hallowed stage more times that we can count, but this time things will be very different. In addition to founding member Don Henley and long-time Eagles Joe Walsh and Timothy B. Schmit, Gill will perform alongside Glenn Frey’s son, Deacon, who will fill in for his late father.

“With Deacon being a part of it, it’s the most appropriate thing. He’s blood and he’s his son. That’s healing in its own,” Gill said of Frey’s son performing with the Eagles. “I’m beyond flattered that of all the people who play and sing music, that they’d think enough of me to do this.”