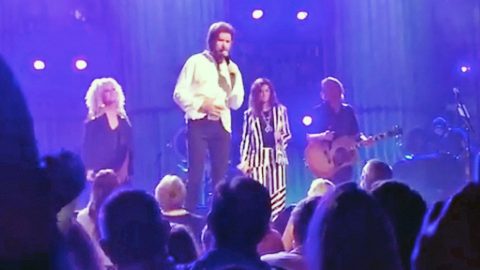 Ronnie Dunn and Little Big Town team up for spine-tingling performance of Brooks & Dunn‘s “Believe” that you have to hear to believe.

Dunn took the lead on vocals while the country quartet harmonized along as backup vocals for their mesmerizing performance of the critically acclaimed song.

The performance came about after Dunn bumped into the bandmates a few days prior, Little Big Town inviting him to join them at their performance at the Ryman Auditorium in Nashville, Tennessee.

“Believe” was co-written by Dunn and Craig Wiseman to be later recorded with Kix Brooks for their 2005 album, Hillbilly Deluxe. The country ballad went on to win “Single of the Year,” “Song of the Year,” and “Music Video of the Year” at the 2006 CMA Awards.