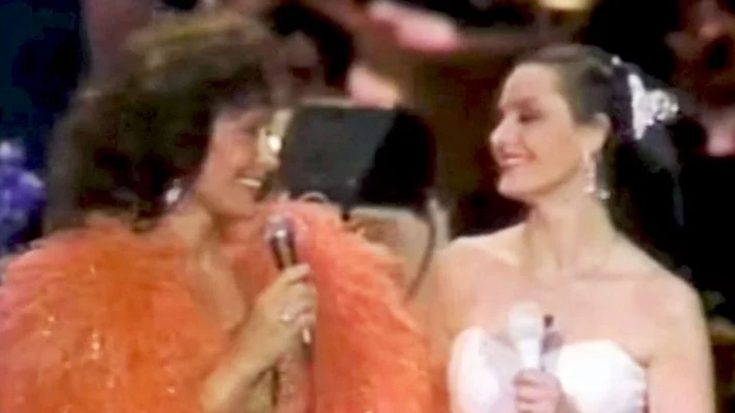 Who would have guessed that a poor coal mining family in Kentucky would produce a bunch of country music stars? Out of the Webb family’s eight children, many of them went on to have successful careers in country music.

You’ve surely heard of at least two of the Webb siblings before. Do the names Loretta Lynn and Crystal Gayle ring a bell?

Lynn and Gayle are two of the most highly-respected artists in country music. The two sisters have countless hit songs, awards, and honors to their names. After singing for decades, each of them remains active as performers and recorders.

The two talented sisters have collaborated many times in the past. But their most memorable collaboration has to be their duet with the Boston Pops Orchestra years ago. Some footage from the performance was recently uncovered and watching it is like watching a musical dream unfold before your eyes.

To start the performance, Lynn and Gayle met one another at center stage while singing Lynn’s signature song “Coal Miner’s Daughter.” The two sisters shared a loving embrace at the end of the song, while the crowd rewarded them with endless cheers and applause.

After that, the duo moved into a soaring performance of Lynn’s Top 10 country hit, “We’ve Come a Long Way Baby.” The sisters sang a short portion of the song before they moved into a new one, which Gayle introduced as her favorite one of Lynn’s…”You Ain’t Woman Enough (To Take My Man).” We have to agree with her choice because that’s one of our favorites of Lynn’s as well!

Then it was Lynn’s turn to sing her favorite song of Gayle’s. She chose “Wrong Road Again,” which was the lead single off of Gayle’s debut, self-titled album.

One of the best parts of the performance came next when Gayle sang her number one hit “Cry.” The pure beauty of Gayle’s voice is most evident in this portion of her duet with Lynn. Just wait until you hear her hit that high note at the end…it’s guaranteed to give you chills.

To close out the once-in-a-lifetime performance, Lynn and Gayle sang a spunky rendition of the country and bluegrass staple, “Rocky Top.” In no time at all, they had the entire crowd clapping and dancing along in their seats.

For Lynn and Gayle, singing country music has always been a family affair. When you watch this video below, you’ll be watching two of the most talented siblings in country music do what they do best. It’s hard to beat these two as entertainers!