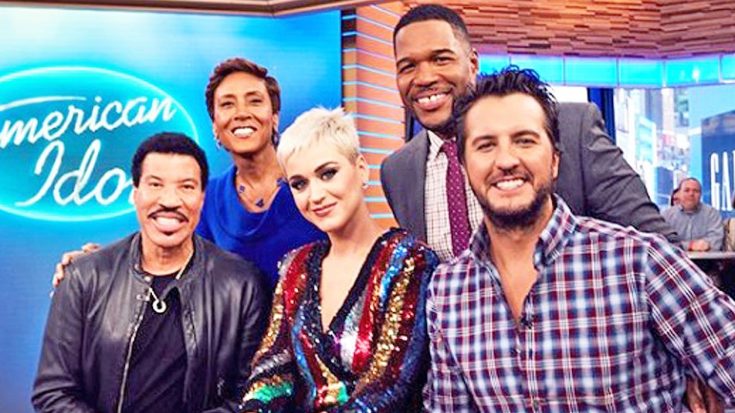 When American Idol announced its plans to proceed with a rebooted version of the show, fans anxiously waited for the judges to be named. For the longest time, pop star Katy Perry was the only artist signed to the project.

Over time, rumors started to flood the internet that a major country music star would be joining the panel of judges. The country artist that everyone was naming as a future judge was none other than Luke Bryan.

It made sense to country fans why Bryan would be selected to be a coach. After all, he’s one of the biggest stars in the business right now. He also has a little bit of experience with singing competitions, as he previously assisted Blake Shelton as his advisor during a season of The Voice.

But although rumors were running rampant about Bryan’s casting, the “Light it Up” singer held off on confirming the news for quite some time. Because of this, fans started to wonder if the rumors had any sort of truth to them.

Bryan eventually announced that they were indeed true, and it was also revealed that Lionel Richie was joining the show as well. But fans couldn’t help but wonder…why had it taken so long for Bryan to confirm he was a judge?

Finally, Bryan provided an answer to that question during an interview on Tuesday (December 12) with radio station Big 95.5 out of Chicago. As he confessed during the interview, there was a “mole” in his inner circle that was leaking out all of the details about his Idol deal as it was in the making.

During his interview, Bryan recalled a previous interview with Big 95.5, during which one of the hosts asked him about his role on Idol. Bryan had to cut that interview short, because at the time he was not yet allowed to talk publicly about being an Idol judge. Reason being? He had just confirmed the deal 30 minutes beforehand.

So how did that happen? In his new interview with the station, Bryan said that classified details concerning his Idol deal were being spilled by an inside source over and over again:

“We were trying to get all the contracts and stuff handled, and we knew we were going to do it, but we were having trouble with like an internal mole that kept leaking out info. We would negotiate the deal and it would be like … it’d be gossip everywhere with all my deal points and such. So it was kind of crazy.”

Although it was a bit of a wild ride when it came to working out his Idol deal and dealing with the rumors, Bryan is having a blast working for the show now. As he told the media in November, he’s “loving every second” of his time on Idol so far.

While it will still be a while before we get to see Bryan in action on Idol, you can watch him play piano with Richie during one of their breaks in the video below!