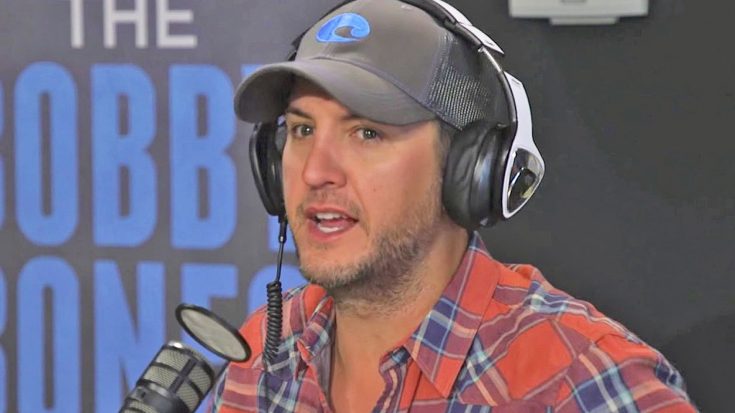 On Wednesday (August 23) country fans got their first clue into what kind of material they can expect to hear on Luke Bryan‘s upcoming record. That clue came in the form of his new single, “Light It Up.”

Written by Bryan and Old Dominion’s Brad Tursi, “Light It Up” takes a technological approach to the common heartbreak theme. The song revolves around a narrator who has had a falling out with the woman he loves, leaving him to stay home and constantly check his phone for a message from her.

Bryan also shared another big detail about the album when he stopped by to visit the Bobby Bones Show. Although he wouldn’t name an exact date, Bryan stated that the album will be out “After Thanksgiving, [and] before Christmas.” That gives us a pretty good idea of when to expect it!

Another small detail that Bryan revealed has to do with one of the tracks on the album. As he told Taste of Country Nights, the new album contains a duet!

Although Bryan confirmed there is a duet on the new album, he was hesitant to say much more about it. He never named who his duet partner is, but he dropped a pretty big hint when he said that he collaborated with a female artist on the track.

Bryan has only recorded one duet with a female artist before: 2015’s “Home Alone Tonight” with Little Big Town‘s Karen Fairchild. That means the possibilities are endless in terms of who Bryan could have picked to accompany him on his new duet.

It makes sense that Bryan would have picked someone within country music to sing with him. But other artists have been diving into pop collaborations lately, and they’ve paid off. Kenny Chesney and P!nk’s “Setting the World On Fire” and Dierks Bentley and Elle King‘s “Different for Girls” are just two examples.

So who knows? Maybe Bryan’s duet partner will have roots in a genre other than country. Only time will tell!

While you wait to find out more about Bryan’s upcoming duet, enjoy his new single “Light It Up” in the clip below. Let us know which artist you think Bryan should sing a duet with!