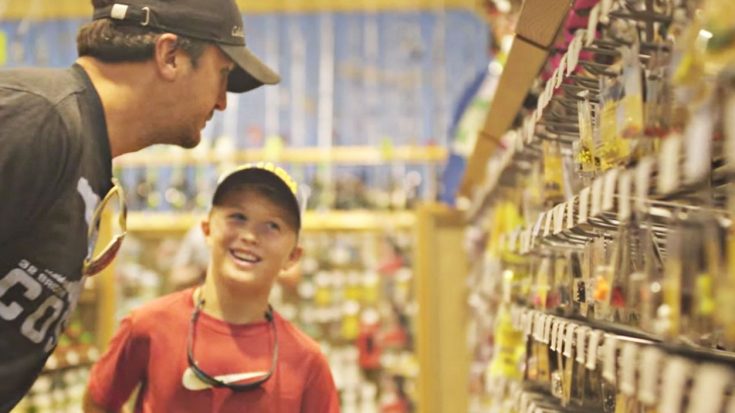 Hunting, fishing, and loving every day is a mantra that this country star is teaching his kids – one day at a time.

Taking his son, Bo Bryan, on the road with him for a couple shows and some great times outdoors, Luke Bryan showcases their family fun in a new episode of his YouTube series LBTV.

Kicking it off with a quaint fishing trip just outside of Columbia, Tennessee, Luke and Bo manage to snag a few bites while fishing just below Flint Rock. Laughing and smiling the whole time, this father-son duo was clearly having a blast during a moment of downtime in the singer’s intense touring schedule.

After catching a couple tiny fish, the two move on to some target practice out on the family’s farm in Tennessee before they had to be at a concert venue just a few hours away – but that wasn’t the end of their fun-filled adventure!

Apparently, Luke’s son had never been inside of a Cabela’s store, so, naturally, dad decided that it was time to change it and show him all the magic that is Cabela’s.

When asked what he would do when he first got into the store for the first time, young Bo said comically that he was going to “Pass out” from excitement.

Laughing though it, the two exited the tour bus and entered the store checking out every inch from the lures and massive catfish tank to the stuffed and mounted animals that are on display.

It’s clear that this was a special moment for both father and son with the two being blessed enough to hang out for a few days during summer break and bond over hunting, fishing, and music!

Watch this adorable adventure in the video below.