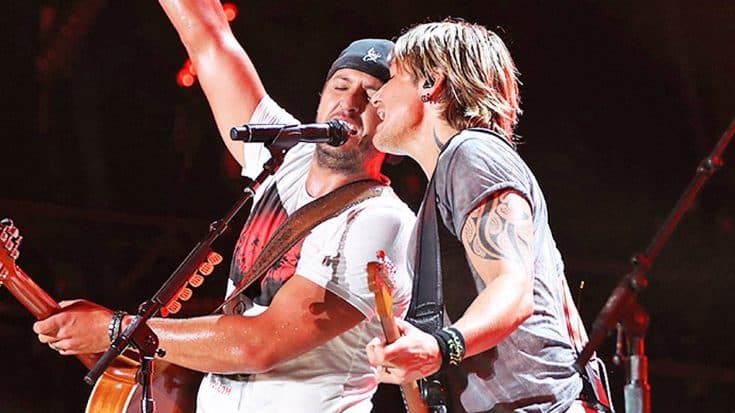 For the televised portion of the 2016 CMA Fest, Luke Bryan had a surprise in store for the thousands of fans that tuned in to watch him perform. Much to the viewers’ delight, he welcomed Keith Urban to the stage. Their entire collaboration wasn’t featured on the television program, but it did showcase Urban’s wicked guitar skills.

A fan at the festival captured a more extensive video of Bryan and Urban’s collaboration, during which they performed a country class and a major crowd pleaser.

Released in 1987 as the second single off of their album Hold On, the Nitty Gritty Dirt Band‘s “Fishin’ in the Dark” was a huge hit. It claimed number one on the charts in both the U.S. and Canada and had sold over a million digital copies by 2015.

Since “Fishin’ in the Dark” is such a beloved country song, it’s been covered by multiple other artists, including Emerson Drive and Garth Brooks. So during the CMA Fest, it was Bryan and Urban’s turn to put their own spin on the classic tune.

Bryan took the lead on the song, while Urban joined in on the chorus. But Urban got his own chance to shine through his various high-energy guitar solos. At one point, the two of them even engaged in a little guitar battle! We’ll let you determine who the winner was.

What made this duo’s performance of the Nitty Gritty classic stand out from all others is the fact that they performed it as part of a medley. At one point, Bryan could be seen whispering something to Urban, and it wasn’t long before the two of them started singing “Shine” by rock band Collective Soul before they transitioned back into “Fishin’ in the Dark.”

A little while later, Bryan whispered something to Urban again, and he played a guitar part that led into a cover of Brooks & Dunn‘s “Hillbilly Deluxe.” Finally, they concluded their performance by bringing it all back to where it began by singing “Fishin’ in the Dark.”

You can watch Bryan and Urban’s performance below!