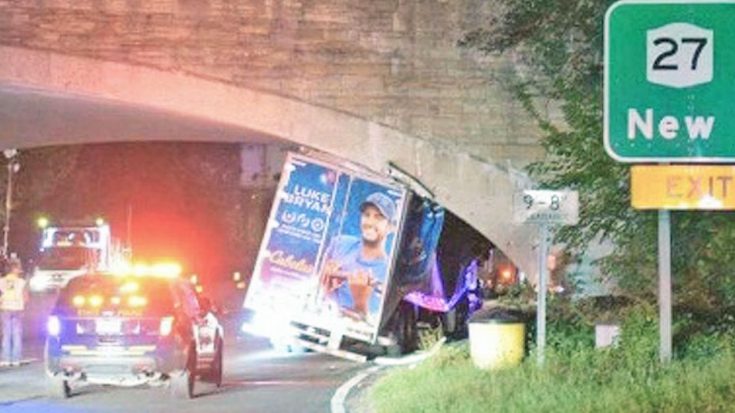 Luke Bryan is undoubtedly one of the busiest artists in country music these days. Every year, Bryan embarks on a massive summer tour before launching into his special Farm Tour in October.

This summer, Bryan has been touring across the country on his Huntin’, Fishin’ and Lovin’ Every Day Tour. His most recent tour stop was on Sunday evening (August 27) at the Northwell Health at Jones Beach Theatre in New York. Based on a couple of tweets Bryan issued after the concert, it seems as though he was feeling a bit under the weather.

“Sorry bout voice tonight,” Bryan wrote. “Gave you all I could. Glad it got better mid show.”

Bryan attributed his lack of a voice to bad allergies. He shared his perfect solution for handling a rough day such as that one…tequila.

What’s crazy is my allergies. I focus all day to sing good. And some days the kitchen sink won’t work. Then you just drink tequila. Ha

But Bryan’s allergies weren’t the end of his problems. As reported by Newsday, Bryan’s equipment trailer struck an overpass while driving northbound on Wantagh State Highway at Sunrise Highway around 2:30 AM on Monday (August 28). The incident occurred just hours after Bryan wrapped up his concert at Jones Beach.

Usually, large trailers are not allowed on the parkways. However, special permits are given to those traveling in connection with shows that take place at the Jones Beach theatre.

There were no reports of any injuries. As of press time, Bryan has not issued a statement concerning the accident.

This bit of bad luck comes on the heels of a celebratory moment for Bryan. Last week, he debuted his new single, “Light It Up,” which is the first release off of his upcoming record. You can give it a listen in the clip below.