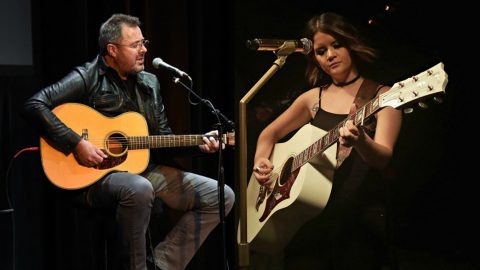 The country music community, and the rest of the country, was shaken when a lone gunman chose a music festival to carry out a senseless act of violence. 59 people have been confirmed dead and more than 500 injured after a shooting took place during Jason Aldean’s set at the Route 91 Harvest Festival in Las Vegas Sunday night (October 1).

In the hours since, social media has been flooded with heartbreaking stories of survival and messages of prayer and hope. For country singer Maren Morris, she knew of one way that she wanted to reach out to all those affected…..through song.

In a post made to Facebook, Morris revealed that 3 years ago she wrote a song and last year recorded it with Vince Gill. Not knowing when would be the right time to release “Dear Hate,” she saved it. But after last night’s events, Morris knew the time had come.

“I realized today that there’s never a right time,” Morris said of releasing the song. “Hate is everywhere, and I’m sick of not doing enough. In the darkest tunnel, there is still love & music. That’s what it’s here for. Here is Dear Hate. Any cent I see from this I’m donating to the Music City Cares Fund. Link for everything below. #LovesGonnaConquerAll“

Hear Maren Morris and Vince Gill sing “Dear Hate” in the video below.

You can help victims of the shooting by donating to the official GoFundMe page by clicking here. Or, you can contribute to the Music City Cares Fund set up by the Community Foundation of Middle Tennessee by clicking here. 100% of the proceeds will go to Las Vegas to help with the immediate and long-term needs of victims in the shooting.