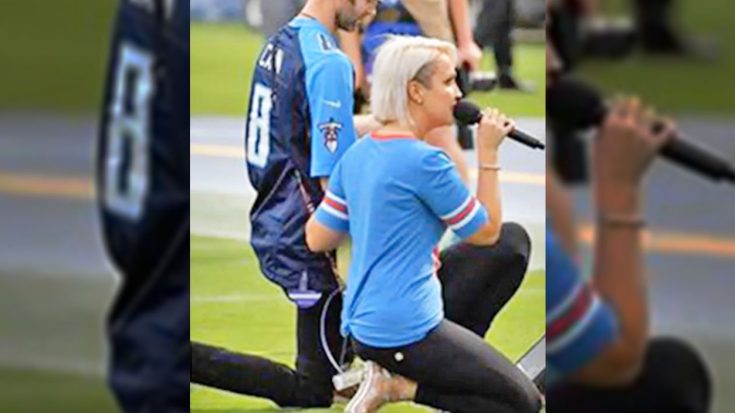 If she wasn’t already, Meghan Linsey pretty much became a household name last weekend because of her National Anthem performance before the Tennessee Titans and Seattle Seahawks game.

The Voice runner-up and rising country singer stood at center field with her guitar player, who also happens to be her boyfriend, and sang “The Star-Spangled Banner” in front of thousands at Nissan Stadium in Nashville, but no NFL players.

Both teams chose to stay in the locker room during the National Anthem performance. Below are statements from both teams.

“As a team, we wanted to be unified in our actions today. The players jointly decided this was the best course of action. Our commitment to the military and our community is resolute and the absence of our team for the national anthem shouldn’t be misconstrued as unpatriotic.”

Fans knew that many NFL players would be protesting the anthem, but no one expected a singer to do so. Linsey was one of two National Anthem singers to take a knee following their performance. She spoke about it briefly following the game, but really opened up about her decision in an open letter in The Washington Post.

“I saw racism all around me growing up: I remember getting a homecoming ballot in high school and seeing the names divided on the page. One section read “black,” the other “white.” I remember thinking it couldn’t be real. That was in 2004,” she wrote.

“Racism is still a huge stain on the heart of this country, and it is still very much alive. I see it often when I am touring with members of my band, who are primarily black men,” Linsey continued. “We recently played a venue where I was told that the promoter did not want to pay me because my ‘drummer was threatening.’ This was at a country club in the Deep South. I was with my drummer, who is like a brother to me, the entire day, and I never saw any type of aggression from him. The only threat she saw was the color of his skin.”

She also explained exactly why she took a knee.

“I took a knee for those who are mistreated, beaten down and disregarded in this country. I took a knee because every movement needs allies, and I knew that someone who looks like me and comes from my background needed to do it. When you’re white, it’s easy to disregard racism and not see your own privilege. Instead, I wanted to use my privilege — and my platform — to shed a light on systemic racism and social injustice.”