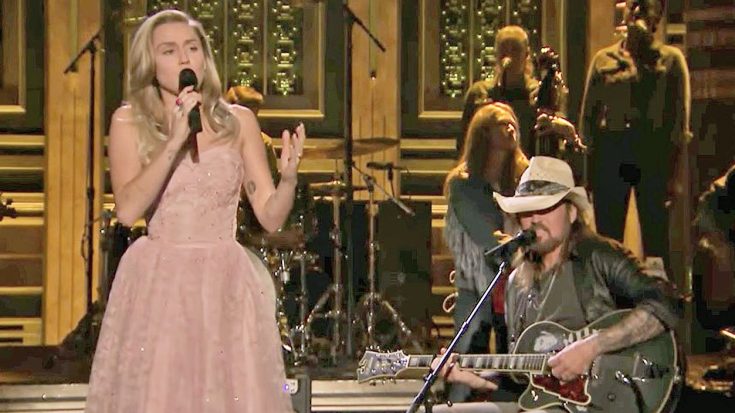 On October 2, 2017 the world lost one of its greatest singers and musicians…Tom Petty. A Rock and Roll Hall of Fame inductee, Petty served as the voice as the voice behind iconic hits such as “Free Fallin'” and “You Don’t Know How It Feels.”

Although Tom was a rock artist, his influence spanned across all genres. As a result, members of the larger music community were deeply saddened to hear about his passing at the age of 66.

Since Tom’s death, numerous music stars have paid tribute to him by covering one of his songs. That’s exactly what Miley Cyrus and her father, country singer Billy Ray Cyrus, did when they appeared on The Tonight Show.

Wearing a delicate pink gown, Miley took center stage while Billy Ray sat behind her and played guitar. For their tribute, the two performed a song that only Tom’s most devoted fans have probably heard.

That song was “Wildflowers,” which served as the title track of Tom’s 1994 solo album. The same album also contained the lead single “You Don’t Know How It Feels,” which was a number one hit on the Billboard Hot Mainstream Rock chart.

In comparison to some of Tom’s other songs, “Wildflowers” has more of a stripped down, folksy vibe. This made it the ideal song for Miley and Billy Ray to cover, since both of them have roots in country music.

Miley started off the song singing in the lower part of her range. But by the end, she was hitting high notes with just as much ease. It was the way that she handled those high notes that surely gave the studio audience a few goosebumps.

In addition to capturing her skill as a singer, “Wildflowers” also showcased Miley’s ability to connect to the songs she performs. Watching her, you could tell that she was truly feeling all of the words she sang, and placed great meaning behind them.

Along with Billy Ray’s gentle harmonies and guitar playing, this has to be one of the best tributes to Tom that we have seen so far. Tune in below to give it a listen. It’s sure to leave you with a lasting impression.