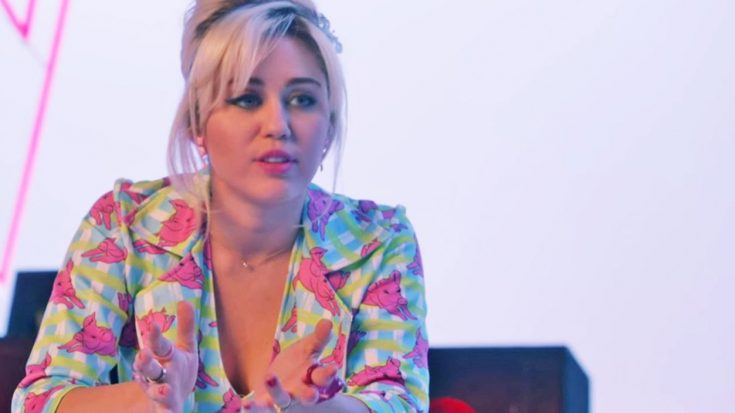 Miley Cyrus is just one of the many celebrities who claimed they would move out of the country if Donald Trump won the race for President against Hillary Clinton.

“This makes me so unbelievable [sic] scared and sad…. Not only for our country but for animals that I love more than anything in this world….Honestly f— this s— I am moving if this is my president! I don’t say things I don’t mean!)”

After election results were announced, millions of people watched for reaction from Cyrus. In a shocking move, the vocal Democrat took to Twitter to reveal that while she believes that “in her lifetime, [Hillary Clinton] deserves to be the first female President,” she accepts Donald Trump.

Miley explained her change of heart with a personal, tearful message to Donald Trump.

“Happy Hippies, we adjust and we accept everyone who they are. And so, Donald Trump, I accept you. This hurts to say, but I even accept you as President of the United States.”

In a follow-up post made to Instagram, Miley encouraged her fellow Democrats and Happy Hippies saying, “If we want Donald Trump to accept us …. We must be accepting towards his presidency & his promise to ‘unify’ our country.”

Go to my Facebook to see a video of my reaction & reflection on last nights election …. If we want Donald Trump to accept us …. We must be accepting towards his presidency & his promise to "unify" our country and "make America great" …. I leave out the "again" because this country has never been able to live up to its full potential because we've been putting up our own divided walls between each other. We don't need Trump to do that for us…. So WE must take a hammer to the bricks WE built up and be more LOVING and compassionate towards all living things! (including the planet) (p.s. Mr. Elected president….. Global warming IS real. ACCEPT THAT)

What do you think of Miley Cyrus’s reaction to the election results?