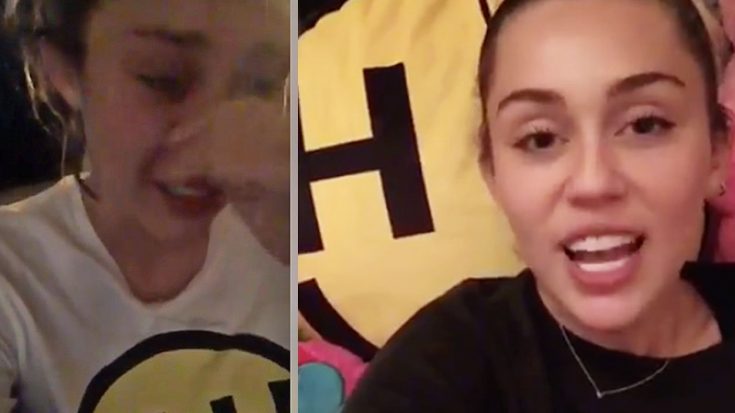 Miley Cyrus sent fans reeling when the pop star posted a video of herself in tears over the election results. Cyrus was devastated, tears streaming down her face as she expressed her disappointed in what she believed was candidate Hillary Clinton’s deserved opportunity to run the United States.

Rather than wallowing in a loss, Cyrus has chosen to remain hopeful and encourage others to imitate her lead. The “Voice” judge revealed that will be “smiling”, as well as teaming up with Happy Hippie to launch a new campaign titled “#HopefulHippies”.

“Myself and Happy Hippie are putting education for young people at the very top of our list of priorities in honor, of course, Hillary Clinton. And I am so excited to see what we can do together because we have made such an impact on the LGBTQ community, fighting homeless and injustice for everyone.”

Cyrus wrapped up her video by addressing the love she has for her fans and promoting peace and strength throughout her fans, as well as the nation.

What are your thoughts?

Many of us aren’t sure what to do after the election, but now more than ever it’s important for us to come together and take action to work for the America we want. That’s why we’re launching #HopefulHippies, and I’m asking you to get involved in your own community and make a commitment to the issues you care about, whether it’s donating, volunteering or showing your support! I’m starting off by pledging to education, and I’m excited Happy Hippie will now be supporting classroom projects and schools with DonorsChoose!! If you need ideas to get you started, check out HappyHippies.org to find local opportunities near you supporting the issues we care about. Share your pledge to take action in your community using #HopefulHippies. Can’t wait to see yours, I’ll be reposting some of my favorite ones! #strongertogether