Military Veteran Bursts Into Tears After Being Reunited With Dogs 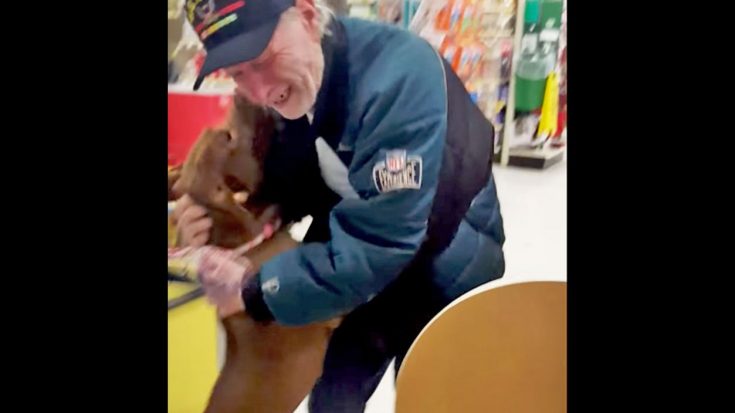 After suffering a major heart attack in September of 2015, a Vietnam veteran’s two dogs, Baily and Blaze, were picked up by First State Animal Center and SPCA in Camden, Delaware.

When it became uncertain whether the dogs’ owner – whose name hasn’t been disclosed – would recover enough to take care of his adorable pups, PetSmart sterilized them and put them up for adoption. While Baily and Blaze are good-looking and well-trained, miraculously, they remained unadopted just in time for their owner to be released.

Desperate to get his dogs back, the man stopped by PetSmart to put a deposit down for Baily and Blaze, unable to afford the full $250 in adoption fees. After he left the store, a staff member took it upon herself to raise the funds needed to cover the adoption fee for the man who had given so much to his country.

The following day, the veteran returned to explain he would need a little longer to find the money, the staff members eager to share with him that money was no longer an issue.

“Are you serious?” the man asked as he burst into tears. “They’re my dogs?” he asked before continuing, “I thought she was giving me the money back because I couldn’t have the dogs, and I couldn’t understand. She told me that the dogs are mine!”

“He was so thankful he shot a kiss to God for the blessing,” adoption counselor Lindsay Carrothers shared with the Huffington Post. “It had everyone in tears. You could just feel the love those dogs had for him. And there shouldn’t have been anything, especially money, that should’ve stood in his way to getting his family back.”

In addition to covering the full adoption fee, staffers and volunteers bought food, toys, and any supplies he would need until he got back on his feet.

You can watch the emotional reunion below.