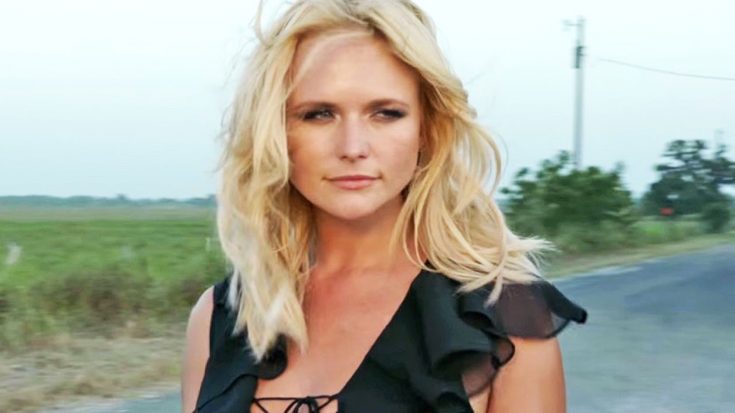 It’s been nearly a year since Miranda Lambert opened up for the first time about her highly-publicized divorce from fellow country star Blake Shelton. In a December 2015 interview with Cosmopolitan, Lambert made a brief statement about her divorce saying that she and Shelton gave it their best try.

“We were together for 10 years, married for four, were very quickly divorced, and are friends. I’m still processing everything and figuring out where to go and what happened. [Marriage is] a tough business, and we gave it our best college try.”

From the sounds of things, that may very well be the only statement Lambert makes about the split…unless you read between the lines of her music.

A new report from the New York Post states that the “Little Red Wagon” singer is refusing interviews to promote her new album, The Weight Of These Wings.

“She was offered Rolling Stone, a New York Times piece . . . She went to her publicist and said, ‘I don’t want to do any of it. I want the music to speak for me,’ ” a source close to Lambert told the New York Post.

“She only wanted to do TV performances. She made them turn all of it down. She said, ‘Gwen’s and Blake’s albums didn’t sell, and all they did was do press.’ She’s trying to go Beyoncé and let the music do the talking.”

In August, Lambert spoke about her new project with Billboard magazine. At the time, the album was still in the works and Lambert was nervous about how it would be received, especially after her year of silence.

“I’m nervous as hell,” she told Billboard. “I’ve been hunkered down for a year writing, recording, trying to live a normal life and getting ready for a new album. No one’s heard from me. I’ve been pretty silent all this time. And now that I’m coming with a song, it does make me nervous.

“Every record I’ve ever made has been a reflection of where I am right then in my life, however old I am. And I’ve never held back at all. But this time, with what I happened to be going through in my life, being honest was never really a choice. Everybody knew anyway.”

The Weight of These Wings was released on Friday the album’s reception proves that Lambert had nothing to be nervous about. Her ‘Be honest, say what you want to say’ approach seems to have worked as the album shot to the top of the iTune Country Albums Chart over the weekend. Check it out here.

Listen to Miranda Lambert’s first single from her new album below.