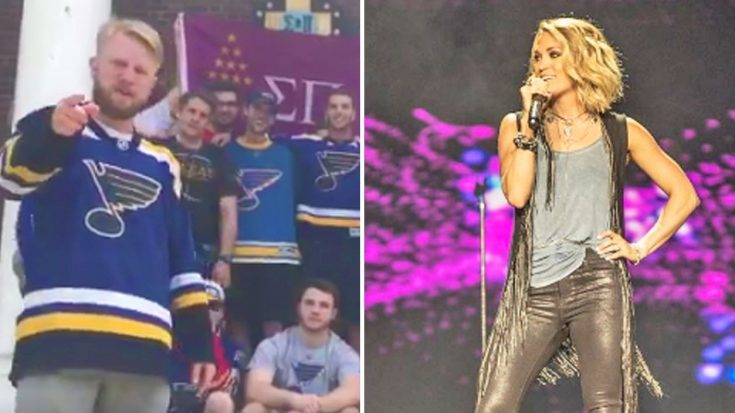 Carrie Underwood has to be one of the most vocal Nashville Predator fans around. She proudly reps the gold and blue in any way, shape, or form.

She even made a surprise appearance during Game 3 of the playoff series between the Predators and the Chicago Blackhawks to sing the National Anthem. Her husband, Predators captain Mike Fisher, was forced to keep it a secret from his teammates, who all had no clue she would be singing before their game.

The Predators went on to win the playoff series 4-0, and Underwood took to social media to brag about the sweep.

The Predators will begin Round Two of the Stanley Cup Playoffs against the St. Louis Blues on Wednesday (April 26) in St. Louis, Missouri. One Missouri Fraternity, who are big Blues fans, wants Underwood to put her money where her mouth is.

Sigma Pi Fraternity at University of Missouri took to Twitter to challenge Underwood to a high stakes hockey bet.

“We have a bet we wanna make with you. If the Predators win the next series against the Blues, we’ll all come down and donate 200 community service hours to the charity of your choice in Nashville, but if the Blues win, you host a concert in Columbia, Missouri and all the proceeds go to a charity of our choice. Your move,” the Fraternity members said before cheering, “Let’s go Blues!”

Underwood has yet to respond, but the tweet has gotten almost 3,00 retweets and significant media coverage.

Watch the Fraternity call out Underwood below.

Hey @carrieunderwood we have a challenge for you. Can we get some help @StLouisBlues @PredsNHL pic.twitter.com/p0rGMEEdlv