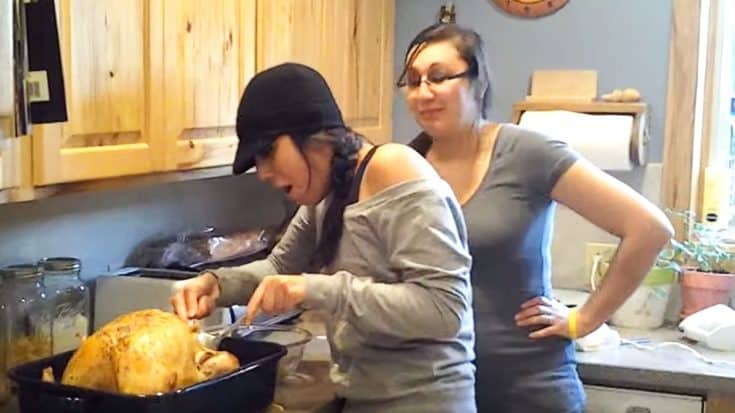 The holidays are about getting the family together, feasting on some delicious food, and remembering what we’re thankful for. But the holidays are also about pranking the ones you love the most, even if a few harmless tears are involved. Right?

That’s right, one mom took Thanksgiving to whole new level. While filming her daughter, who was helping scoop the stuffing out of the turkey, she was anxiously awaiting her discovery that she was about to eat a “pregnant” turkey.

It isn’t clear how many were in on the prank, but judging by her sister’s uncontrollable laughter, there was more than one prankster in the kitchen!

YouTube user, Nerissa Hawkinson uploaded the video in 2013 and it immediately took off online. Years later it is still a sensation, with millions of views and countless comments.

Many have tried to replicate the prank, but the original is just priceless!

The poor girl in the video was caught off guard by this horrific Thanksgiving discovery. No one wants to find a baby turkey inside the mama turkey!

But in this moment of absolute shock, she must have forgotten that turkeys in fact, lay eggs. Whoops!

Looking back, we’re sure she finds the prank hilarious. It really doesn’t get old, and you can see what a shock it would be for anyone.

What do you think of the “pregnant turkey” prank? Watch the priceless video below!

Will you be trying a similar prank on someone this Thanksgiving?