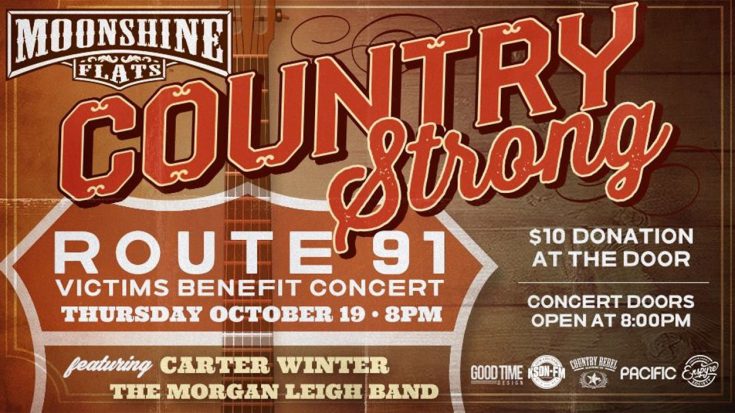 Presented in partnership with Country Rebel, we are honored to be able to use our voice to give back to the community that means the world to us. Many of our very own friends and family were in attendance when the tragedy struck Las Vegas. The victims and families of this terrible tragedy still need our help and we’re committed to supporting all relief efforts.

KSON-FM, Pacific, and Enspyre Society are also sponsors of the event and are helping to spread local awareness.

The Las Vegas Victims fund was set up by Steve Sisolak, the Clark County Commission Chair, and according to the GoFundMe page, “Funds will be used to provide relief and financial support to the victims and families of the horrific Las Vegas mass shooting.“

Moonshine Flats is a staple in Downtown San Diego that attracts country music fans because of its weekly live music, line dance lessons, and incredible atmosphere. San Diego has a large country music community, many of whom were in attendance when a gunman opened fire on 22,000 fans during Jason Aldean’s set at the Route 91 Harvest Festival.

“Country Strong” Route 91 Victims Benefit Concert will be held on Thursday, October 19, with doors for the concert opening at 8pm. A celebration of life for Jennifer Irvine, a San Diego attorney who was killed in the shooting, will be held from 6-8pm. A $10 donation at the door is requested. If you aren’t in the area, or can’t make it to the concert but would still like to help out, you can donate directly to the Las Vegas Victims’ Fund by clicking here.