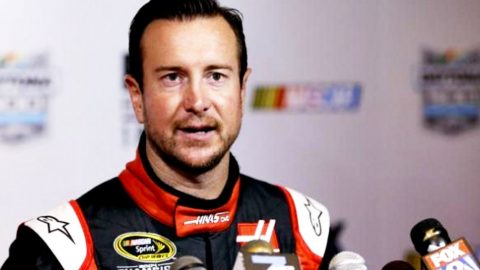 This racing superstar is once again in the eyes of the court after getting hit with a massive lawsuit by a management company that claims he stopped making his required payments.

NASCAR’s Kurt Busch, who recently was married to longtime girlfriend Ashley Van Metre in a Bahamian ceremony, is facing a $1.4 million dollar lawsuit just weeks after his big day – and right before the 2017 season kicks off.

Busch’s former management company, Sports Management Network (SMN), has launched a lawsuit against the NASCAR driver in U.S. District Court’s Eastern District of Michigan and claims that Busch has failed to make the proper payments required by his agreement since late 2016.

SMN is seeking $1,470,050 from Busch which includes interest, costs, attorney’s fees, and his back-due payments of $930,450. The management company also asserts that they are owed an additional $540,000 that has not been billed out, but which will be based on his performance/earnings in the 2018 season.

NBC Sports reports that a company spokesperson for SMN stated that the driver had not remitted a single payment “despite SMN’s repeated demands for payment on the account.”

When they reached out to Busch’s team for comment, they were redirected to attorney Alan Miller who will be representing Busch in the matter, but no comment was made regarding the lawsuit.

According to the legal docs, Busch had ended his contract with the management company in early 2016, but had been reworked a few times in years prior.

The news outlet reports that the obtained documents show the court filing states, “Subsequently, SMN negotiated and finalized multiple agreements for Defendants, including, but not limited to, driver appearances, sponsor agreements, personal services agreements, pursuant to the terms of which Defendants will be paid compensation through 2018.”

This is the second lawsuit of 2017 to affect a driver on Stewart-Hass Racing’s team and this is not the first time Busch has been sued by a partner company.

In 2015, he was sued by a clothing line for what they called a “material breach” of a moral clause in their contract.

Find more about the older lawsuit by watching the video below.