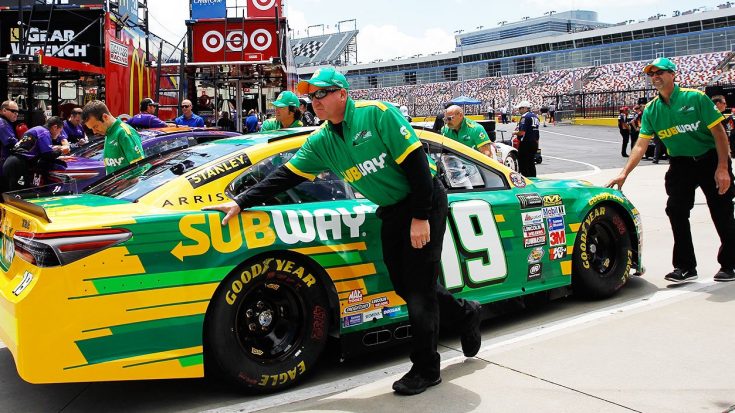 Nearing the end of this season, one television clip cost this driver his entire sponsorship after the sponsor noticed a contract violation – now he’s scrambling to find a new primary sponsor before his next race.

Joe Gibbs Racing driver of the No. 19 car, Daniel Suarez, recently had his primary sponsor, Subway, yank their contract after a clip of Suarez from several months back caught their attention.

As reported by NESN, Suarez’ fan engagement clip for NBC Sports at the New Hampshire Motor Speedway back in July has cost him his contract with Subway. On Saturday, September 3rd, Subway released a statement terminating its agreement with JGR and blindsiding the team.

“Due to circumstances beyond our control, Subway had to terminate its sponsorship of Daniel Suarez,” The sandwich company said in a statement to ESPN.

Speaking to NESN, team owner Joe Gibbs reveals that the cause for the termination was due to Suarez handing out Dunkin’ Donuts pastries during his fan engagement appearance at New Hampshire.

Apparently, Gibbs believes that Subway axed their contract without warning because the sandwich chain sells breakfast just as Dunkin’ Donuts does – and the TV slot was viewed as him promoting a direct competitor, which is a no-no in the sponsorship game.

A spokesperson for JGR says that Suarez did not violate any “moral clause” of his contract. Both Suarez and his team were caught completely off guard by the termination.

What do you think about Subway canceling their sponsorship with Suarez? Let us know in the comments below.

Watch the video of Kenny Wallace discussing Subway’s exit below (begins at 9:43).