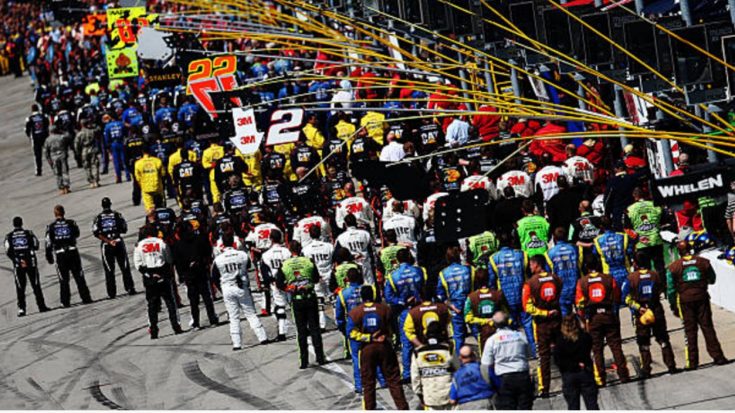 The national anthem protests sparked by comments from President Donald Trump were the topic front and center of sporting events over the weekend. The President’s comments calling for the firing of any NFL player who chose not to stand during the national anthem has resulted in backlash from athletes in other areas of sports and from entertainers, including country singer Meghan Linsey who took a knee on the field following her national anthem performance at the Tennessee Titans vs. Seattle Seahawks game Sunday afternoon (September 24).

Many teams chose to stay in the locker room during Sunday’s pre-game performances of our nation’s anthem. Others chose to kneel when it was sung as a way to send a clear message to the President about practicing their freedom of expression.

But, some of NASCAR‘s team owners are taking a different approach. Richard Petty and Richard Childress are just two of the owners who have spoken out against the protests saying the act of skipping out on the national anthem as showing disrespect for our country and those who have fought and died for the very freedoms others are protesting.

Hall of Fame driver Richard Petty made his sentiments clear when he said, “Anybody that don’t stand up for the anthem oughta be out of the country. Period. What got ’em where they’re at? The United States.”

When asked if a protester at Richard Petty Motorsports would be fired, Petty said, “You’re right.”

Longtime team owner Richard Childress shared Petty’s thoughts on the matter. “Anybody that works for me should respect the country we live in. So many people gave their lives for it. This is America.”

Childress added that he told his team that protesting would “get you a ride on a Greyhound bus,” according to ESPN.

Petty Motorsports co-owner Andrew Murstein told ESPN that he doesn’t agree with Petty and Children, but respects their opinion.

“They are all proud Americans who have lived through world wars and turbulent times,” Murstein said. “While I respect their thoughts — and personally, I think it’s the wrong thing to kneel — I wouldn’t fire someone for expressing their feelings.”

What do you think of the national anthem protests? Let us know in the comments below.