By Manly Bryant on April 10, 2018
Advertisement 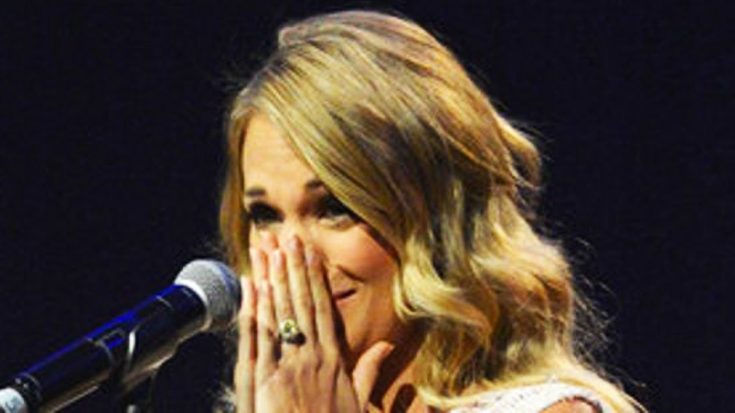 Moments after posting an update that detailed exactly what she’s been doing since undergoing emergency surgery and receiving 40+ facial stitches from a nasty fall, one of country music’s beloved singers shared her tearful new song.

Beginning a new letter to her dedicated fan club, Carrie Underwood revealed that her facial injury and broken wrist have continued to heal quite nicely – adding that she’s only about 10% away from a full recovery.

Far and beyond just her health update, Underwood also shared some breaking news about her forthcoming new single – and it’s one she calls both emotional and real.

“The other thing I’ve been up to over the past few months is, of course, making new music,” she said in her newly published letter. “I’ve been in the studio writing and singing a TON, but I’ve also been able to be creative in a way that I’ve never been before, which has been very fulfilling and empowering.”

Carrie Underwood first shared news of her brand new single on Monday, April 9th, 2018 with a photo of her left eye streaming tears of glitter. Beyond the album artwork, she captioned the photo with a release date for the new song. No other details were made available.

Just one day later, Underwood published this heartfelt letter to her fan club website and revealed more details about the song – and how she wrote it.

“The first single is a song I love so much and can’t wait to share it with you,” Underwood gushed. “It’s called ‘Cry Pretty’ and I wrote it with three incredible women…”

The co-writers on Underwood’s tearful new song are famous country songwriters Hillary Lindsey, Lori McKenna, and Liz Rose. All three have had a hand in crafting some of the biggest hits in country music.

This country music megastar continues to explain that the title of her new single is meant to refer to emotions that completely take over – and make you unable to hold them back.

“It really speaks to a lot of things that have happened in the past year and I hope when you hear it – you can relate those feelings to those times in your life,” she continued. “It’s emotional. It’s real. And it ROCKS!“

“Cry Pretty” will be released Wednesday, April 11th, 2018 at 6 a.m. Eastern Time and by the look of the artwork and how Underwood describes it – it’s sure to be a hard-hitting tune to resonate with the masses.

Check out Carrie Underwood’s new single artwork below and watch her newest music video for “The Champion” below.

Good morning! Just a couple of updates to share with you…? smarturl.it/o9yuge