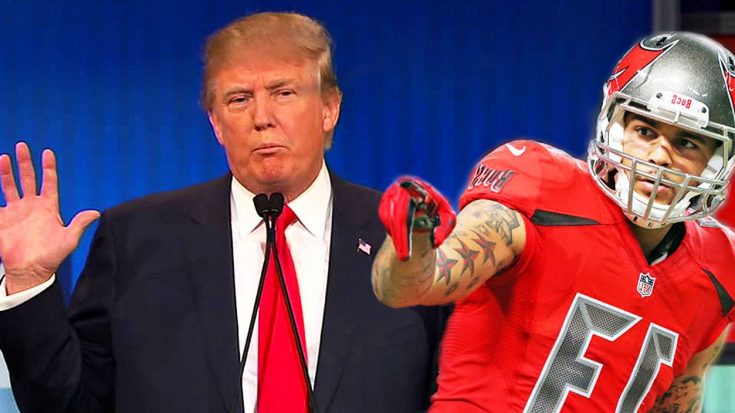 The NFL has been seeing quite the string of protests, essentially spiraling from San Francisco 49er’s quarterback Colin Kaepernick when he chose to kneel during the Nation Anthem because he refused to “stand up to show pride in a flag for a country that oppresses black people and people of color.” Although the bold move outraged fans and fellow players, Kaepernick did receive various forms of support for his actions. While other players joined the quarterback in his fight to end oppression, one player took the same stance with a much different outcome in mind.

Tampa Bay Buccaneers wide receiver Mike Evans informed cameras and interviewers that he would be kneeling during the anthem not to bring light to racial issues as his fellow player was, but as an opportunity to protest who will be our 45th President. Evans refuses to support President-elect Donald Trump, telling WFLA’s Paul Ryan, “When Ashton Kutcher comes out and says we’ve been punked, then I’ll stand again.” He continued to say, “I’m not big on politics and things like that… But I told myself if this happens, then America is not right right now. I said this a long time ago. When [Trump] ran, I thought it was a joke, and the joke continues.”

Evans made himself clear of his support for the men an women who have fought over the nation’s flag, explaining,

“I don’t want to disrespect the veterans or anything. The men and women that served this country, I’m forever indebted to them.”

The wide receiver was humbled with words of encouragement from a fellow player who admired Evans’ stance, although it was said that a faint amount of boos were audible amidst the anthem protest.

#Bucs wide receiver Mike Evans explains his why he knelt during the National Anthem in protest of President Elect Donald Trump. #CHIvsTB pic.twitter.com/vrvR7lQVav