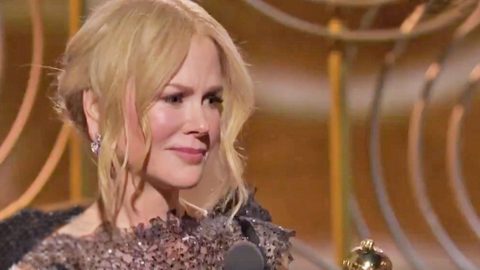 Nicole Kidman was named “Best Actress in a Limited Series” at the 75th Annual Golden Globes last night (Jan. 8), proving yet again that no one quite delivers acceptance speeches like the Australian actress.

“Sunny, Faith, I love you andI’m bringing this home to you, babies,” began Kidman.“And Keith Urban,” Kidman said. “When my cheek is against yours, everything melts away and that is love, it’s true! I love you so much!”

Kidman told the complicated story of a woman trapped in a psychosexually abusive marriage when she took the role of Celeste Wright in HBO Mini Series Big Little Lies. ﻿Through her role, Kidman hopes to shine a light on the rarely discussed topic of domestic violence in society.

“My mom was an advocate for the women’s movement growing up, and standing here, my achievements are her achievements,” she said. “This character I played represents something at the center of our conversation right now: abuse. I hope we can elicit change…Let’s keep the conversation alive.”

Celeste is a beautiful retired lawyer and mother of two, but behind closed doors, she is the victim of her husband’s psychosexual abuse. In addition to Kidman’s win, Big Little Lies stars Laura Dern and Alexander Skarsgard won in the categories of supporting actress and best supporting actor.

You can watch Kidman’s acceptance speech below.