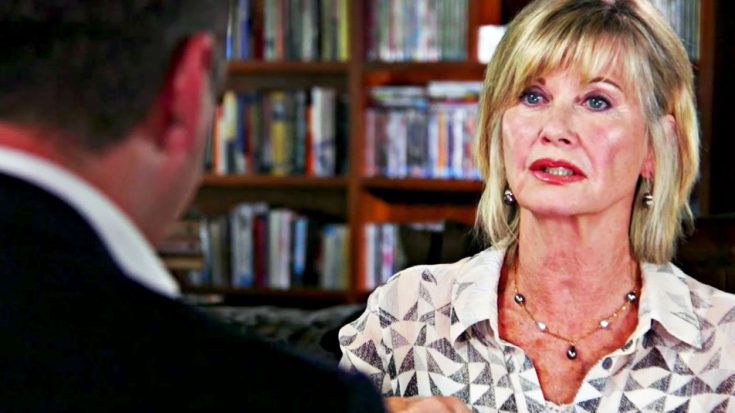 More than two decades after she and her family believed she had beaten cancer, the disease returned in an unexpected way, but this absolute bright light and inspiring singer holds a stellar outlook – even after enduring incredibly painful moments during the battle.

Olivia Newton-John first became famous as a teenage singer, later as an actress in the hit movie Grease, but always continued her career as a musician and soared across the charts of multiple genres throughout her more than 50-year career.

Recently, as she was preparing to perform a bevy of shows across North America, she learned of the heartbreaking return of cancer she once believed she’d beaten – but none of that will ever break her spirit.

Maintaining a composure and attitude that inspires and brings hope to many, Newton-John opened up about the painful struggles of facing cancer for the second time in her life. An Australian native, she sat down with her friend and reporter Karl Stefanovic of 60 Minutes Australia for a heart-to-heart interview.

After learning of her diagnosis, the first painful moment came when she had to break the news to her beloved husband, John Easterling, and daughter, Chloe.

“That wasn’t easy,” she said solemnly. “But, I did deliver it in a positive way of course. Everyone has [difficult] conversations in their life – they are hard.”

But beyond the emotional pain and mental struggle processing the second occurrence of cancer was the physical pain it brought on, a pain she uses natural remedies and marijuana to help manage.

“Earlier this year, I was in agony,” Newton-John told Stefanovic. “So I had it checked out and they did an MRI in the area in my sacrum and they found a tumor. I skidded to a very quick halt.”

The agonizing pain she describes prevented her from doing many of the things she loves, like playing tennis or walking along the beach. Both are goals she is working towards and, as she reveals, she recently regained the ability to walk short distances without extreme difficulty.

“I couldn’t walk at all a month or so ago,” she continued explaining the difficulties that came with the pain. “I could walk – but not straight.”

Our prayers are with Olivia Newton-John as she works to overcome this second battle with cancer and her bright, beaming attitude shines throughout this inspiring interview – even as she details the hardest parts of her fight.

Watch her full interview with 60 Minutes Australia in the video below.