Phil Robertson Reveals He May Run For President 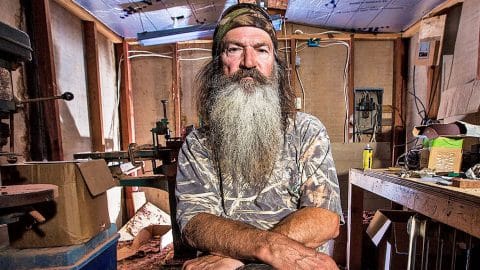 Get ready for the White House to be painted camo, y’all!

Phil Robertson is very outspoken about his political and religious beliefs, especially during the months leading up to the Presidential election. Early on in the election, Robertson publicly endorsed Ted Cruz for President.

A staunch Republican, when his candidate dropped out of the election, his support went to Donald Trump, the only remaining Republican candidate.

Just three months before the November election, Robertson sits down with Right Wing Watch to answer a few fan questions.

Robertson agreed with a caller who asked if “the rising secularism” in the United States is the “greatest assault on Christianity” he’s ever seen. He ended his answer advising America to vote for the godliest candidate, and that may be himself.

“I can’t tell you how to vote,” he said. “If they keep fooling around long enough, they’re going to force me to run. If you want to see a change in America, get me in there, dude, and there will be a big change then, if you all are ready for it.”

Is America ready for a Phil Robertson Presidential campaign? What do you think about all this?