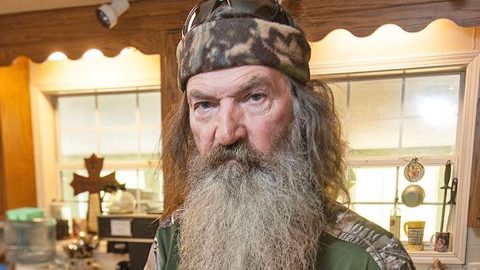 Outspoken Republican and Duck Dynasty star Phil Robertson has been on the road doing press for his movie Torchbearer, which comes at the perfect time to also talk politics.

Robertson, a Trump supporter, has a few choice words for critics of the Republican Presidential candidate.

“I would say they need to lighten up, start going out and preaching the gospel to different people, including Donald Trump, and give him some time to think about spiritual matters, and work with him, and not condemn anybody,” he said, according to Us Weekly.

Robertson has even asked to be on Trump’s cabinet as his Spiritual Advisor. He feels that although Trump is new to politics, he may just be the answer America needs.

While most celebrities are saying they will move if Trump is elected, Robertson revealed to Breibart News Daily that if Hillary Clinton wins, he will move.

“The day has come now. It is a tipping point. And if Donald Trump does not win, I think I’m going to the woods and stay there the rest of my life on the Earth,” he said.

He ends his interview with a simple statement on why he is a such a staunch Trump supporter.

“My take on it is, better a man who sticks his foot in his mouth from time to time than a woman who pours out lies. Therefore, if he’s a loose cannon, I’ll take one loose cannon that will operate, and it will fire, than a hundred that are old, rusty, and worn out.”

Do you agree with Phil? Sound off in the comments below!