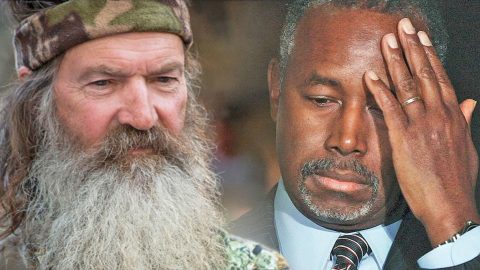 For many months now, Duck Dynasty patriarch Phil Robertson has been begging President Donald Trump to be appointed with a position on his cabinet.

Specifically, he asked to sit down with President Trump to attempt to convert him and become a Born Again Christian.

“I’ll make a valiant attempt behind the scenes … to sit down with Donald with a Bible in between us,” Robertson told Fox & Friends in May 2016.

He later sat down with Gordon James Klingenschmitt, a Colorado State Representative and former Navy Chaplain to further discuss his plan for a cabinet position.

“I’ve requested, sent multiple people to him, and they all laughed when I said it, but the ultimate, for America, would be we convert Trump,” he said. “I can see it now, Donald Trump and his cabinet, and there’s ol’ Newt or one of those guys that get in there, or Sessions, and the camera keeps panning over and they get to me and they say “This man is his spiritual advisor.”

He never responded to Robertson’s pleas, but just two days before Trump was inaugurated as the 45th President of the United States, Robertson took over a position held by former presidential candidate Dr. Ben Carson as the Chairman of Fight for the Court.

Fight for the Court is a project within the American Legacy Center, which according to their website, ensures “America remains a land of opportunity, prosperity, and freedom for all.“

Robertson will help “the right kind of judges” get nominated for a spot on the Supreme Court, which, in his opinion, should be a person who “respects God and the Constitution”.

If you would like to help Robertson Fight for the Court, you can sign up here. See Robertson’s announcement and first act as Chairman below.

Fight for the Court

Exciting news. Phil Robertson "The Duck Commander" is taking over for Dr. Ben Carson as Chairman of 'Fight for the Court.' A new Supreme Court justice will be nominated very soon, and we need to be ready.