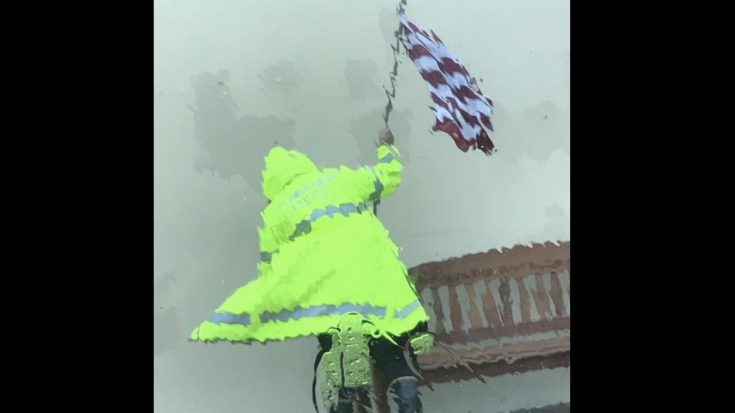 Hurricane Harvey has been battering the Texas coast over the weekend. Stories of destruction and horror have followed as Harvey continues wreak havoc. In the midst of the chaos, one man took the time to rescue a battered American flag and the image quickly went viral.

According to a Facebook post from the Aransas Pass Police Department, Officer Jack McCarty ran into the storm to grab the flag as rain and wind blew about. “While some dishonor and desecrate her, APPD Ofc. Jack McCarty will stop at nothing to honor and save her,” the post reads.

In a similar act of patriotism, Paul Goodloe, a meteorologist for The Weather Channel, found the flag bunched up near a pile of downed trees outside of the school. A Weather Channel camera man captured the emotional moment when Goodloe spotted the flag and proceeded to rescue it.

“I don’t know how strong the winds have to be to cut a palm tree in half,” Goodloe says to the camera. “But next to it, you have Old Glory. I can’t let Old Glory just sit here like that.”

“The school, yeah it’s battered. So is the flag, but we got to fold this up. Make sure it isn’t a casualty of Hurricane Harvey.” The video then shows Goodloe and another crew member folding the flag in a ceremonial fashion.

.@Paul_Goodloe recovers an American flag on the streets of Rockport. pic.twitter.com/ifK5YT7ul7

Our prayers continue to be with those affected by Hurricane Harvey. If you would like to contribute to relief efforts, please click here to donate.