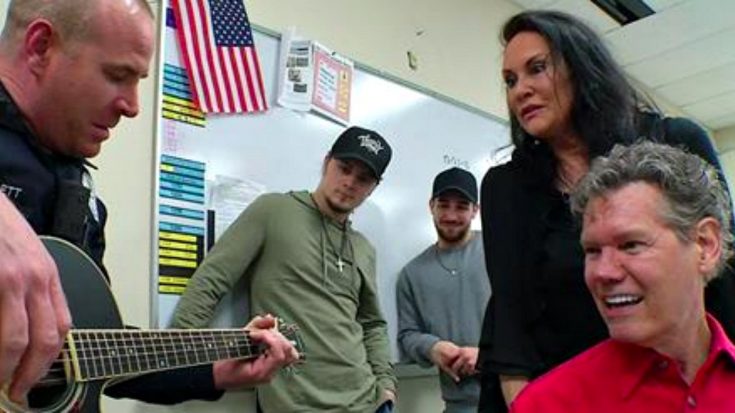 What goes around, comes around. The saying held true for a Gainesville, Texas, police officer this Christmas season.

Keith Bartlett has devoted his life to public service, a job that often gets taken for granted. But, when he lost his house and most of his possessions in a house fire two weeks before Christmas, his community rallied around Bartlett and his family to show their support. One friend in particular went above and beyond to show appreciation to the police officer. That friend is country music legend Randy Travis.

Early Sunday afternoon, Bartlett was called out to check on a suspicious vehicle, reports Texas television station NBCDFW. After realizing the car wasn’t there, he headed back to the police station. Bartlett soon discovered that the call was simply a decoy used to lure him away from the station while two very special Christmas guests arrived with a surprise in hand.

In the briefing room sat Randy Travis, his wife Mary, his sons and Bartlett’s family. Barlett first met the Travis family after a few years ago while responding to a theft at their Texas ranch. When Mary Travis saw the news that the Bartlett’s had lost their home, she and Randy knew they wanted to help. In addition to providing the family with furniture, they called in a huge favor to help replace one of Bartlett’s most prized possessions….his Gibson guitar.

According to family members, Bartlett spent much of his time off playing his prized guitar. So when his charred and unfixable instrument was pulled from his burned home, he was heartbroken. A local news outlet covered the police officer’s story, and that’s how the Travis’s heard the news.

“I just know how important music is and what therapy it is, especially at a time like this,” Mary Travis said.

So Mary called up a friend at Gibson who overnighted a brand new guitar, just like his old one, to North Texas.

“Surprised isn’t even the word for it,” Bartlett said after being presented with the guitar in the middle of his Christmas shift. “These are amazing people.”

Watch Keith Bartlett’s Christmas surprise unfold in the video below.