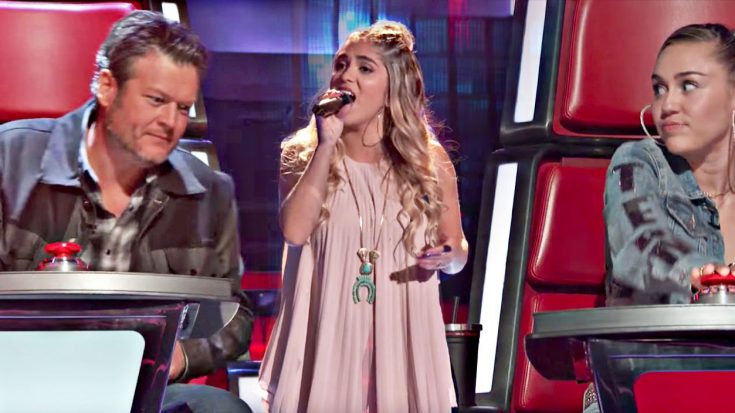 Giving her own soulful twist to this chart-topping hit, she earned the attention of two coaches that were willing to fight for her!

Sophia Bollman is just 18 years old, but her voice sounds as if she’s been singing for decades longer than that! She took on her own version of Kelly Clarkson’s hit song, “Invincible.”

She had almost made it through her entire blind audition and her family was hollering backstage for the coaches to turn around when a split-second later, both Blake Shelton and Miley Cyrus slammed their buzzers and whipped around to see young Sophia singing her heart out!

“I just want you to know that you have an incredible pop, soulful voice,” Shelton complimented her. “I was sitting here going ‘Man, I know this isn’t my lane,’ but I have worked with artists like you before and I’ve had a lot of success with them. You deserve to be in this competition!”

To counter Shelton’s compliments and high praise, Cyrus spoke openly to the teenager about her performance and voice, expressing the magnitude of her range and power – adding that she has incredible freedom with her voice.

Who did she end up choosing as her coach for her spot on the newest season of The Voice?

Watch the video below of Sophia Bollman’s full audition to find out what team she landed on!