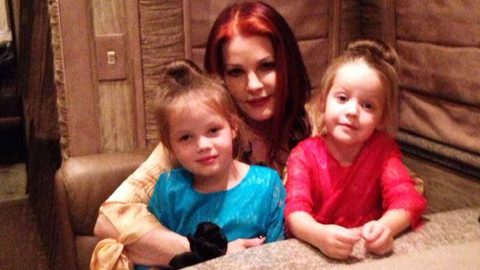 Amidst, a series of chaotic tabloids and legal conflicts, Priscilla Presley took to social media to put to rest the rumors surrounding her grandchildren being put into foster care. Daughter Lisa Marie Presley visited court last week to file accusations against her current husband, although both are proceeding in divorce.

Accusing her husband of holding “inappropriate” images of children, as well as accusations of “child abuse and neglect” according to People, Lisa Marie informed legal workers of husband Michael Lockwood possessing “hundreds of inappropriate photos of children”. The information was enough to order their twin girls to be placed in the care of someone other than both parents. While rumors of foster care whirled throughout tabloids and social media, Priscilla was quick to shut down the speculations with a bit of truth.

Taking to her Facebook, Priscilla uploaded a shot of the 8-year-old twins, Harper and Finley, enjoying a sunny day while swimming in their grandmother’s pool. She captioned the photo with a bit of clarity, saying,

“There is Lots of confusion, commotion and concern from all the talk circulating. Let me put this to rest… the girls have not been in foster care and never will be. The girls have been with me and will be until all this is sorted out.”

Fans were more than supportive of Priscilla and the twins, expressing their sadness for the family to be enduring such trying legal times. People also revealed that Lockwood’s attorney has referred to Lisa Marie’s accusations as “highly sensational, inaccurate and unproven.” No investigations on Lockwood have been confirmed.

For more information and details you can visit People Magazine.