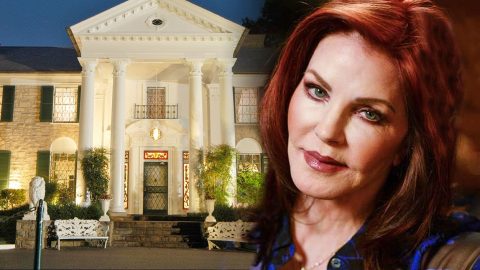 Every year, hundreds of thousands of Elvis Presley fans flock to his Graceland estate in Memphis, Tennessee. It was the place where Elvis retreated from the world, and now serves as his final resting place.

Due to all of the rich history associated with Graceland, visiting the estate has become a pilgrimage of sorts for Elvis’ fans. But if it weren’t for his ex-wife Priscilla, Graceland may never have been as it is today.

Priscilla played a major role in turning Graceland into one of the country’s leading tourist attractions. She continues to work on updating the estate to make it enjoyable for all of Elvis’ fans. Earlier this month, Priscilla was on hand for the grand opening of The Guest House at Graceland, a new hotel on the grounds of the estate.

Although the opening of the Guest House has been the big talk at Graceland for months, the estate recently made news for another reason. On August 15, the day prior to the 39th anniversary of Elvis’ death, protestors started to assemble near “The King’s” iconic home.

Fox News reported that the protestors were Black Lives Matter activists. According to Fox, the activists saw the anniversary as Elvis’ death as the perfect chance to draw attention to their message.

The protest was called “Shut Down Graceland,” as the activists protested a believed lack of fair treatment from police in the city. They also picked Graceland in particular because they felt “it demonstrates one of Memphis’s most common forms of financial inequality.”

Priscilla has remained quiet about the protest over the course of the past few months. But she finally broke her silence when a fan asked her about it during a Facebook Q&A.

She kept her response short and sweet, writing, “I feel BLM takes the opportunity to send their message wherever there are large gatherings that are getting news worthy publicity.”

Q: Do you have a comment about the protest that happened at Graceland recently with the BLM (Black Lives matter)…

Only a few arrests were made at the protest, which ended just as quickly as it began.