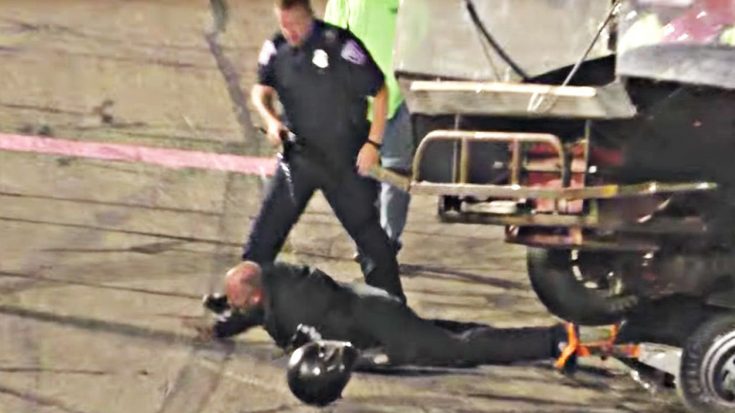 During what seemed to be a normal weekend race, one driver was laid out on the ground after an officer was forced to tase him following one of the wildest twists in recent history at Anderson Speedway.

Two drivers at a Crazy Figure 8 Race event held at the famous Anderson Speedway are becoming one of the most-watched videos after their dangerous and bizarre interaction was caught on film.

First posted to YouTube, this video shows 2017 champion Shawn Cullen and competitor Jeff Swinford dashing around the course in the normal figure-8 shape that these events follow.

The track’s account of the event then states that things started to spiral out of control when Cullen and Swinford made contact and entered a caution period. On the restart, the video shows Cullen ramming Swinford as they move down the track. Completing the first turn, he then spins Swinford onto the infield grass.

Swinford wasn’t going to take this and did the unthinkable to retaliate against Cullen’s behavior: he floored the gas and sped toward Cullen’s car, crashing hard into the front end and driving clear on top of Cullen’s vehicle, narrowly missing the driver.

While Swinford’s car was teetering on top of Cullen’s hood, Cullen dashed from the driver’s seat and began throwing hard punches at Swinford who was stuck inside his car. A nearby police officer ran out onto the track alongside officials, and in just a flash had put Cullen down on the ground with his taser.

The video shows Cullen falling down to the ground and the flashes from the officer’s taser as he tries to take control of the situation and separate the drivers.

Both drivers were led away from the scene in handcuffs. Swinford was charged with misdemeanor criminal recklessness, while Cullen was cited for disorderly conduct.

The Anderson Herald Bulletin spoke to the Speedway’s owner, who issued a powerful statement about the situation.

“Swinford will not race at this racetrack as long as I own it,” the owner, Rick Dawson said. “And I plan to own it for a long time.”

Watch this insane video below and let us know what you think in the comments!