By Manly Bryant on February 8, 2017
Advertisement 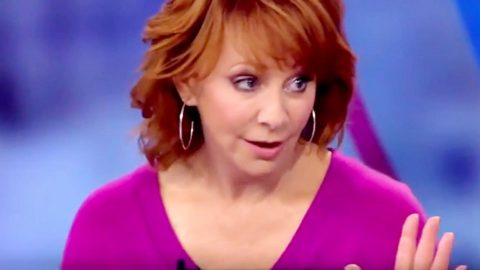 The country superstar stopped by the set of The View earlier and dished out her thoughts on politics as an entertainer.

A guest host on today’s show (Wednesday, February 8th), Reba McEntire sat down with the the fellow ladies to discuss all sorts of current events and happenings – including, of course, politics.

When Joy Behar, who was filling in for Whoopi Goldberg as moderator, brought up an event involving politics and entertainers, Reba wasn’t afraid to speak her mind.

Addressing singer Drake’s recent political rant at one of his concerts, Reba explained that she looks at politics in a very different way.

“I take it this way: They have paid their hard-earned money to come in there and fill a seat — parking, getting something at the concession stand, go and eat before the concert — I am there to entertain them, to take their worries away from them, so when they walk out, they can kind of have a little lift in their step and [go], ‘Aw, that was such a great break from all the problems I have to deal with during daily life.’ So I’m not going to give them my political views.”

When asked if she had ever been shy about revealing her political position out of fear that she might lose her fans, Reba confessed that hadn’t really ever been a concern.

“That’s not as important as this is my job to entertain. It shouldn’t be my platform to be up on stage giving my political views.”

Many performers have taken the platform they have in front of a huge audience to help and spread the word about their political views and have tried to engage in various ways with the audience, like attending rallies or performing concerts to support their party – but Reba doesn’t like to mix the two.

What do you think about her position on politics? Do you agree?

Watch the clip below and let us know your thoughts in the comments.