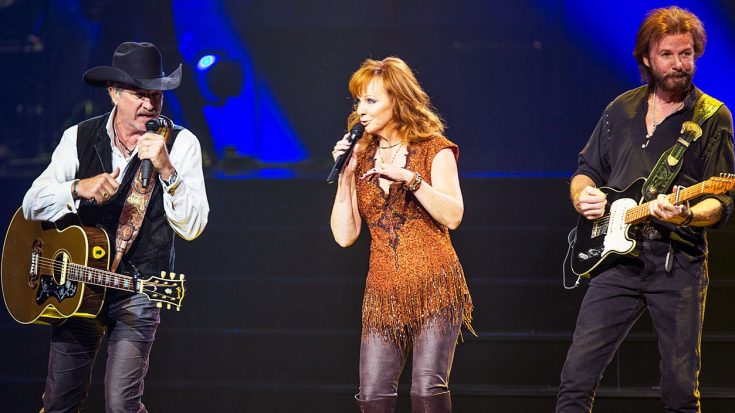 It isn’t an uncommon thing for country stars to take part in a Las Vegas residency. Everyone from Shania Twain to George Strait has committed to playing a series of shows in Sin City, much to their fans’ delight.

But it’s a trio of country icons that have experienced some of the greatest success with a Vegas residency. For over a year now, Brooks & Dunn and Reba McEntire have entertained thousands with their series of Vegas shows.

Since fans can’t seem to get enough of Reba, Brooks & Dunn: Together in Vegas, Ronnie Dunn hinted toward the possibility that they’d return in 2017 and 2018. Speaking to Rolling Stone in August, Ronnie said there was “no end in sight” to the trio’s Vegas residency after completing contract negotiations.

In an interview with ET that was released on Tuesday (November 29), Reba officially confirmed what Ronnie teased months ago…they have 12 Vegas shows scheduled for 2017!

“I love going to Vegas and hanging out with Ronnie and Kix, who wouldn’t?” she said. “They’re so much fun…We love it. We were really excited to come back.“

The new show dates make Reba and Brooks & Dunn’s residency the longest-running one for a country artist at the Caesar’s Palace Colosseum since it opened in 2003. Based on how successful the residency has been already, we have a feeling it’s going to continue for many years to come.

If you’re looking for a Christmas gift for the country fan in your life, you’re in luck. Tickets for the new Reba, Brooks & Dunn: Together in Vegas shows go on sale on Friday (December 2). You can learn more about the show dates by heading over to Reba’s official website.

We’re so excited to hear that Reba and Brooks & Dunn have decided to extend their residency! Since they are such close friends, they share a great sense of chemistry that makes for some incredible collaborations. Tune in below to catch one of their Vegas performances.